The Conservative Heart: How to Build a Fairer, Happier, and More Prosperous America 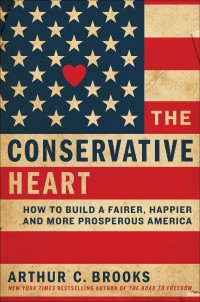 In Arthur Brooks’ new book The Conservative Heart, the final lines are the simplest, yet the most impactful in conveying its central message. “The world needs us to stop losing,” Brooks ardently tells the reader, “[…] There are too many people everywhere who have been denied the happiness that comes with earned success. Those people need us. If we want the chance to help them, we’ve got to improve the way we make our case to the American people.” Note that the claim is not that the world would benefit economically from conservative leadership, but that the world needs conservatives to win and govern like it. The difference in the two arguments, Brooks states, is that the rational economic argument is valid, but antiquated. For conservatives to win, they need to make the moral argument for their principles and practices.

Much like Russell Kirk’s now canonical The Conservative Mind, Brooks argues the case for conservatism to his audience. His audience, however, is varied. The book is for already existing conservatives, but the most engaging sections of the work make the case for conservatism to a broad audience. Brooks opens the book with chapters focusing on the failures and successes of domestic and international practices to eradicate poverty, exemplifying why free-market capitalism is a moral imperative.

Though he is very much ideologically in line with older, more theoretical conservative works, Brooks’s alternative methodology is his greatest asset. Rather than making the logical case for free markets, he makes the moral case for happiness through earned success.

As the President of the American Enterprise Institute (AEI) Arthur Brooks is an easily recognized name for most engaged conservatives and libertarians. Those familiar with his recent work will recognize many of the claims, evidence, and anecdotes Brooks implements in the book. Though Brooks covers plenty of new material in the book, the recycling of some older material may come off as a weakness to readers familiar with AEI’s work. Nonetheless, The Conservative Heart is a work where the past work coalesces with new considerations creating a more complete case for why earning success in a free society is one of the most pressing moral issues of contemporary discourse.

Throughout the first sections of the book, readers will see how earned success in organizations like the Doe Fund has unleashed the potential of 22,000 homeless men to earn $750 million and create new lives for themselves. They will see how in Dharavi, India, people are rising out of poverty through free markets opposed to Marienthal, Austria, a ghost town created by unsustainable dependency and depression. Stories like these exhibit the necessity for citizens to embrace conservative principles so that we may fulfill the promise of the pursuit of happiness.

The Conservative Heart is a book on how conservatives must communicate to those who aren’t engaged economics wonks. They cannot lecture on the particulars of economic theory to the American people. Rather, they must make the moral argument that cuts to the concrete reality of every citizen and potential citizen’s experiences. Accomplishing this requires empathic communication combined with an authentic sense of empathy. Only this approach can effectively convey the principles that unlock the potential of each American to pursue their own happiness.