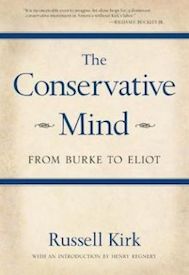 Whittaker Chambers called it “the most important book of the 20th century.” Ronald Reagan hailed its author, Russell Kirk, for helping “to renew a generation’s interest in…the conservative revival in our nation.” Columnist James J. Kilpatrick declared flatly: “There is no adequate way to measure the influence of Russell Kirk, whose seminal book, “The Conservative Mind,” remains the best and clearest exposition of the conservative philosophy.”

The Wall Street Journal, in a major article on Kirk’s influence, called The Conservative Mind “the most enduring of Russell Kirk’s books. The impact this lengthy history of conservative ideas from Edmund Burke through T.S. Eliot had upon the tenor and direction of the infant conservative intellectual movement was profound….By articulating the rich tradition of conservative values, Mr. Kirk’s book reinvigorated a dispirited conservatism adrift and barely conscious of its own existence….Kirk is assured a place of prominence in the intellectual histories for helping to define the ethical basis of conservatism.”

In this, his final (of seven) editions of The Conservative Mind, the late Russell Kirk guides us to the core ideas of leading conservative thinkers in thirteen spacious chapters. No other book offers such a splendid panorama of conservative thought.

Among the landmark conservative topics,

The Idea of Conservatism * Edmund Burke and “The Politics of Prescription” * Equality and Aristocracy * The Principle of Order * John Adams and Liberty Under Law * Romantics and Utilitarians * Coleride and Conservative Ideas * Southern Conservatism: Randolph and Calhoun * The Valor of the South * Liberal Conservatives: Macaulay, Cooper, Toqueville * Toqueville on Democratic Despotism * Transitional Conservatism: New England Sketches * Industrialism as a leveller * John Quincy Adams and progress: his aspirations and his failure * The illusions of transcendentalism * Orestes Brownson on the conservative power of Catholicism * Nathaniel Hawthorne: society and sin * Conservatism with Imagination: Disraeli and Newman * Marx’s materialism; and the fruits of liberalism * Newman: the sources of knowledge and the idea of education * Legal and Historical Conservatism: A Time of Foreboding * Liberalism moves toward collectivism: John Stuart Mill, Comte, and positivism * Conservatism Frustrated: America * Henry Adams on the degradation of the democratic dogma * English Conservatism Adrift: The 20th Century * The end of aristocratic politics * Arthur Balfour: his spiritual conservatism; and the tide of socialism * Socialism vs. ability * A dreary conservatism between wars * Critical Conservatism: Babbitt, More, Santayana * Pragmatism: the fumbling of America * Paul Elmer More on justice and faith * George Santayana buries liberalism * America in search of ideas * The Recrudescence of Conservatism * The planners’ state and the new elite * The conservatives’ task; and their prospects in Britain * The fertility of conservative thought in the United States: critics and economists* Possible forms of conservative society * The plan of action for American conservatives * America as a destructive force; and as the conservator of civilization

Praise for Russell Kirk and The Conservative Mind

“Enormously influential … [Kirk] almost single-handedly rooted American conservatism in the rich loam of the ancient Judeo-Christian tradition, and thereby gave it the philosophical heft of a world-view. He also gave it its name.” – WILLIAM RUSHER

“A profound critique of contemporary mass society, and a vivid and poetic image – not a program, an image – of how that society might better itself. … in important respects, the twentieth century?s own version of [Edmund Burke?s] Reflections on the Revolution in France. … Kirk was an artist, a visionary, almost a prophet.” – DAVID FRUM

“It is inconceivable even to imagine, let alone hope for, a dominant conservative movement in America without Kirk?s labors.” – WILLIAM F. BUCKLEY, JR.