The Emmaus Code: Finding Jesus in the Old Testament 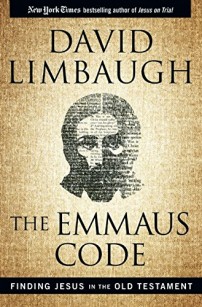 The book’s title, The Emmaus Code, is in reference to the time when Jesus, after his resurrection, walked down the Emmaus Road with two people, explaining how the whole of the Old Testament pointed to him. Limbaugh hopes to lead readers through their own Emmaus Road experience with his book. Those seeking for a book about hidden codes and meanings will be disappointed.

The Emmaus Code had a slow start. The first four chapters lay the historical context and groundwork for the rest of the book – these chapters don’t directly deal with finding Jesus in the Old Testament. The next three chapters provide further groundwork, introducing readers to terms and concepts that will be used later to argue that Jesus is found throughout the whole of the Old Testament. Those who have a familiarity with the overarching themes of the Old Testament and terms used in Biblical study will likely be tempted to skip these chapters, but it is important to bear with him to see how Limbaugh builds his case, instead of jumping in mid-stream.

The second half of the book, where Limbaugh shows how every book in the Old Testament points to Jesus, is where the book really shines. In these chapters, he deals with everything from specific verses to entire books to point out a few of the myriad Old Testament examples of predictions of the coming of Christ. While he provides a good deal of information, he barely scratches the surface and leaves plenty of room for further study.

One thing Limbaugh notes is that Christians need to understand the Old Testament, and, to a degree, “Jewishness”, in order to understand their faith. Given that, it is surprising he mentions nothing about the Jews having the Old Testament books in a different order than the typical Bible. The standard English order is based off a Greek reordering of the texts, trying to group things chronologically. The Jewish order, or Tanakh (TNK), has three sections: the Law (Torah), the Prophets (Nevi’im) and the Writings (Ketuvim). This is the order Jesus used and was familiar with, as Matthew 23:25 indicates. Thus, after the book of Judges, the orders differ between the Hebrew order and the English order.

The absence of this information is slightly puzzling as Limbaugh does note that in Hebrew Scripture, certain books (1 & 2 Samuel, for example) were viewed as one book, and he deals with them in light of that. He also correctly notes that 1 & 2 Chronicles are the last books of the Hebrew canon, which lead naturally into the reading of Matthew (the first book of the New Testament). While Limbaugh makes some very good observations and has a wonderful overview of Christ in the Old Testament, some of his comments regarding the structure of the Old Testament (e.g., Isaiah being the “middle” book of the Bible) are inaccurate because of the difference from the original order to the Greek reordering.

Even so, Limbaugh provides a good bird’s eye view of Old Testament history and how each of the books therein point to Christ. There may be places readers quibble with him about whether or not a particular point is actually a reference to Jesus, but these instances will be few. The whole of the book is such that there can be little to no room for doubt in the reader’s mind that an impressive amount of foreshadowing was documented long before Jesus’ birth. Limbaugh also includes a helpful appendix for finding Old Testament prophecies and the New Testament fulfillment.

This is an important book for lay-Christians, pastors, and theologians to better understand the strength of their faith. Limbaugh walks the line between being accessible and being academic quite well — anyone seeking to better understand Christianity will find this book a valuable resource.