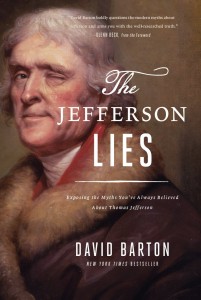 The American public was nearly deprived of the opportunity to read this book.

In 2012 popular historian David Barton set out to correct what he saw as the distorted image of a once-beloved Founding Father, Thomas Jefferson, in what became a New York Times best-selling book, The Jefferson Lies.

Despite the wildly popular success of the original hardcover edition, or perhaps because of it, a campaign to discredit Barton s scholarship was launched by bloggers and a handful of non-historian academics.

What happened next was shocking virtually unprecedented in modern American publishing history. Under siege from critics, the publisher spiked the book and recalled it from the retail shelves from coast to coast. The Jefferson Lies is thus a history book that made history becoming possibly the first book of its kind to be victimized by the scourge of political correctness.

But more than three years later, it s back as an updated paperback edition in which Barton sets the record straight and takes on the critics who savaged his work.

And that s just part of the story. Why did this book spark so much controversy?

It could only happen in an America that has forgotten its past. Its roots, its purpose, its identity all have become shrouded behind a veil of political correctness bent on twisting the nation’s founding, and its Founders, beyond recognition.

The time has come to remember again.

This new paperback edition of The Jefferson Lies re-documents Barton’s research and conclusions as sound and his premises true. It tackles seven myths about Thomas Jefferson head-on, and answers pressing questions about this incredible statesman including:

Through Jefferson’s own words and the eyewitness testimony of contemporaries, Barton repaints a portrait of the man from Monticello as a visionary, an innovator, a man who revered Jesus, a classical Renaissance man, and a man whose pioneering stand for liberty and God-given inalienable rights fostered a better world for this nation and its posterity. For America, the time to remember these truths is now.