The Last Patriot: A Thriller 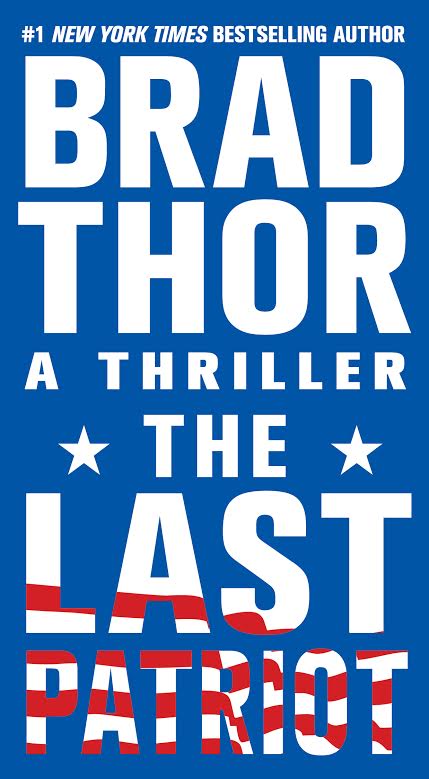 Brad Thor’s seventh political thriller is a high-voltage page-turner depicting the modern struggle between the U.S. and the fanatical faction of Islam that seeks their destruction. The foundation for this conflict may be disrupted forever with the rumor of a missing revelation of Mohammed that was removed from the Koran by some militant Islamic fanatics.

Interestingly, the text in question may have been uncovered by Thomas Jefferson back in 1789. As President, Jefferson was the first leader in U.S. history to wage war on the nation of Islam. His potential uncovering of Mohammed’s missing revelation would not only thwart the militant Islamic faction he was fighting but possibly discredit their entire belief system with the proof that Mohammed never instructed Koran readers to wage war on all non-Islamic people. Because certain Islamic factions would kill to keep this information from ever seeing light, Jefferson was supposed to have hidden clues to the location of this text in a rare first edition of Cervantes’s DON QUIXOTE. Someone who obtained it might be able to decode the secrets Jefferson left within and uncover the proof of Mohammed’s last revelation. Islam’s history of abrogation and blind faith in the Koran may now be jeopardy!

None of this is known to the hero of Brad Thor’s novels, Scot Harvath. At the beginning of THE LAST PATRIOT, Harvath and his girlfriend Tracy are vacationing in Paris, France, when they witness a car bombing outside a café. Harvath is immediately thrust back into the life he thought he had left behind forever — that of Special Operative for the President of the United States and defender of Homeland Security worldwide. The intended victim of the car bomb, saved by Harvath, is a college professor and scholar who is actually on a secret mission on behalf of U.S. President Rutledge. It involves the professor, Anthony Nichols, obtaining a first edition of DON QUIXOTE that was once owned by Jefferson.

Simultaneous to this action is an event on U.S. soil, in which a man named Andrew Salam is apprehended in a murder case in Washington, D.C. and taken in by the CIA for suspicion of terrorism. Salam, while being questioned by Aydin Ozbek, claims he was operating under direction of the FBI and had been specially recruited for a covert operation to track down members of certain Islamic organizations that threaten U.S. security. Ozbek and the CIA learn that Salam was duped and was never actually operating with the FBI. He was taken on by a former American operative, Matthew Dodd, who has since converted to Muslim and is working as a high-level assassin for some Islamic fanatics.

Dodd is also in pursuit of the same book that Nichols — and now Harvath — is after. The only difference is that Dodd has been commissioned by Islam to kill anyone who comes close to obtaining
it. The text that replaced Mohammed’s final revelation contains the most violent passages in the Koran. Allegedly, included in the original version were peaceful passages directly counter to what militant Muslims and Dodd believe to be true.

The pace moves fast and furious as all of the sub-plots converge in the race to find this ancient text. As stated by Nichols: “The mere suggestion that the Koran is incomplete runs absolutely counter to what every Muslim is taught. To accept the premise that the Koran is incomplete would mean accepting that it
is not perfect.” This information provides the motivation of all the central characters and allows the reader to hang on every hair-raising turn that occurs along the way.

Brad Thor and his Scot Harvath novels have evolved considerably since his first, THE LIONS OF LUCERNE. He has ventured into more historical thriller fiction while consistently tapping into his
prior life as a travel writer, clearly seen in the detailed descriptions of exotic locales throughout the world. In the Author’s Note of THE LAST PATRIOT, Thor states that the history contained within was based in both fact and fiction. The final revelation of Mohammed is his own creation, but the rumor of
Mohammed’s assassination and the discussion of Jefferson’s war with Islam are all fact-based. This combination makes for a highly entertaining read and secures Thor’s place with contemporaries like
Dan Brown, James Rollins and Steve Berry.

I had the opportunity to speak with the author at a recent book signing and asked him who in the novel represented “the last patriot.” He replied, “That’s for the reader to decide.” Readers, go to it!