Conservative Book Club » Economics & Free Markets » The Myth of the Robber Barons: A New Look At the Rise of Big Business in America

The Myth of the Robber Barons: A New Look At the Rise of Big Business in America 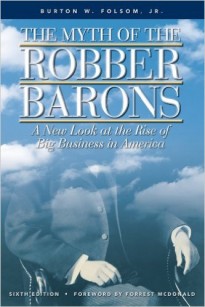 The Myth of the Robber Barons describes the role of key entrepreneurs in the economic growth of the United States from 1850 to 1910. The entrepreneurs studied are Cornelius Vanderbilt, John D. Rockefeller, James J. Hill, Andrew Mellon, Charles Schwab, and the Scranton family. Most historians argue that these men, and others like them, were Robber Barons.

In the Mellon chapter, the author describes how Andrew Mellon an entrepreneur in oil and aluminum became Secretary of Treasury under Coolidge. In office, Mellon was the first American to practice supply-side economics. He supported cuts on income tax rates for all groups. The rate cut on the wealthiest Americans, from 73 percent to 25 percent, freed up investment capital and led to American economic growth during the 1920s. Also, the amount of revenue into the federal treasury increased sharply after tax rates were cut.

The Myth of the Robber Barons has separate chapters on Vanderbilt, Hill, Schwab, Mellon, and the Scrantons. The author also has a conclusion, in which he looks at the textbook bias on the subject of Robber Barons and the rise of the U. S. in the late 1800s. This chapter explores three leading college texts in U. S. history and shows how they misread American history and disparage market entrepreneurs instead of the political entrepreneurs. This book is in its fifth edition, and is widely adopted in college and high school classrooms across the U. S.