Conservative Book Club » Faith & Family » The Party of Death: The Democrats, the Media, the Courts, and the Disregard for Human Life

The Party of Death: The Democrats, the Media, the Courts, and the Disregard for Human Life 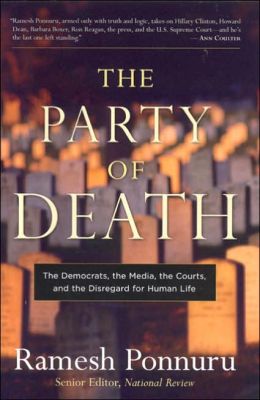 They celebrate abortion on demand as a fundamental human right. They advocate euthanasia, and work energetically for embryo-killing research. They explicitly deny that all human beings are equal in having a right to life, and unblushingly propose the creation of a category of “human non-persons” who can be treated as expendable. In line with that, some of them have already begun calling for the killing of sick infants — for their own good, of course. They are the party of death, and they are becoming increasingly powerful in America today, as well as in the world at large. Now, in “The Party of Death: The Democrats, the Media, the Courts, and the Disregard for Human Life,” National Review’s Ramesh Ponnuru provides an unflinching expos? of their past successes, present activities, and future plans, showing why their principles are so harmful – and how they can be defeated before they destroy our society altogether.

Members of the party of death, Ponnuru notes here, are everywhere. They have taken over the Democratic party lock, stock, and barrel – although they can be found in both parties. He details how the pernicious influence of this dedicated band has permeated every aspect of our culture, corrupting law, politics, and even the teaching of history. Legal abortion, Ponnuru reveals, has unlocked the floodgates for numerous issues that have advanced the death culture, leading directly to the current national debates on euthanasia and embryo-killing for research purposes.

All this has happened, Ponnuru explains, with active help from the media establishment: with collusion from leading media figures, leading Democrats such as Hillary and Bill Clinton, Barbara Boxer, and Mario Cuomo have cannily camouflaged the party of death’s extreme and outlandish views. But they haven’t yet won a total victory. Ponnuru argues that the same process by which the party of death has made such deep inroads into American society can now be used in reverse: pro-lifers must strive harder than ever to restrict abortion and ultimately to end it altogether, for the more we reject abortion, the more we may come to reject other choices for death, too.

In an America that is turning away from abortion on demand, the Democrats may prove to be the last victims of the party of death. In The Party of Death, Ramesh Ponnuru provides a solid and encouraging program to relegate this poisonous party to the dustbin of history.