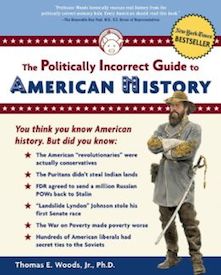 One of the first things Stalin, Hitler, Mao and other totalitarians did was rewrite the histories of their nations, remaking the past to foster their control of the present. The American Left has done the same thing in our country: most American history books – both for students and adults — are riddled with PC nonsense that makes the Founding Fathers over into racist slaveholders, the settlers of the West into genocidal land-stealers, and the welfare state into the harbinger of the ultimate triumph of liberalism.

But now at last conservatives and patriotic Americans have an antidote: “The Politically Incorrect Guide™ to American History” is a handy one-volume guide to our nation’s glorious past that has one key advantage over today’s dozens of dreary PC history books: this one tells you what really happened — not what liberals wish had happened.

From the Puritans through the drafting of the Constitution, the Civil War, the World Wars, the rise of the “Great Society” all the way up through the fiasco of the Clinton Administration, this brightly written book gives you the whole truth and nothing but the truth about our great nation: history professor Thomas E. Woods presents the Founding Fathers as the visionary heroes they were; discusses the real causes of the Civil War and World War I fairly and objectively; and examines in depth the ravages of statism, high taxes, and the war against American initiative.

Not PC, but all true: