The Politically Incorrect Guide™ to Islam (and the Crusades) 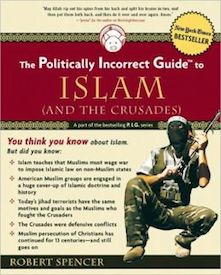 When PC propagandists assure us that jihadist terror doesn’t reflect “true,” “peaceful” Islam, they’re not only wrong, they’re dangerous — because they lull America and the West into letting their guard down against their mortal enemy. And not only do self-appointed “experts” lie elaborately and persistently about Islam — they have also replaced the truth about Christian Europe and the Crusades with an all-pervasive historical fantasy that is designed to make you ashamed of your own culture and heritage — and thus less determined to defend it. But now there’s a remedy: in “The Politically Incorrect Guide™ to Islam (and the Crusades),” Robert Spencer reveals all the disturbing facts about Islam and its murderous hostility to the West that other books ignore, soft-pedal — or simply lie about.

This book is a unique guide to the bloody teachings and history of Islam, and to the Crusades that still stand today as the Western world’s most sustained and successful defense against the warrior hordes who were inspired by those teachings. Exposing myth after myth of the “Islam means peace” establishment, Spencer (director of JihadWatch.com and the bestselling author of Islam Unveiled and Onward Muslim Soldiers) here tackles all the hot-button issues regarding Islam and the Crusades.

Above all, Spencer details how the jihad that the non-Muslim world faces today is in direct continuity with the one the Crusaders fought against. It continues today in Europe and even in America while pressure groups intimidate the media into silence about the real nature and goals of Islam. The whitewashed Islam they present, argues Spencer, hinders our ability to defend ourselves against Islamic terror.

Spencer also explains here what we must do to stop the jihad onslaught not only militarily, but culturally. He maintains that we will not be able to defeat today’s Islamic jihad without recovering pride in the superiority — yes, superiority — of Western, Christian civilization. If we surrender our culture, he warns, soon we will be surrendering our homes. But here at last is a book that helps you reclaim the glorious past of our civilization — and thereby defend that civilization more effectively in the present.

“The jihad that the Western world faces today is identical in its motivations and goals to that which Europe managed to stave off almost a thousand years ago – thanks in large part to the Crusades of which the West is now ashamed. Today’s jihad, as Spencer illustrates here, is proceeding on two fronts: one of violence and terror, and another of cultural shaming and the rewriting of history. Here is a devastating riposte to that revisionism — and a clarion call for the defense of the West, before it is too late.” — Ibn Warraq, author, Why I Am Not a Muslim, editor, Leaving Islam and What the Koran Really Says

“Sweeping away the politically correct myths about a tolerant, peaceful Islam brutalized by demonic Christian Crusaders, Robert Spencer in this powerful, important book lets the facts of history speak for themselves. Spencer’s rousing, straight-talking book is a much-needed antidote to the poisonous propaganda that compromises our current battle against jihadist murder.” — Bruce S. Thornton, author, Greek Ways: How the Greeks Created Western Civilization

“Spencer reminds us of the consequences of our failure to come to grips with the message and implications of Islam. And he warns against the spirit of masochistic self-loathing that permeates the Western elite class. In a sane world Spencer’s recommendations — notably that the upholders of sharia should be treated as political radicals and subjected to appropriate supervision – would not be deemed ‘politically incorrect’ but eminently sensible.” — Serge Trifkovic, author, The Sword of the Prophet

Tags: Robert Spencer, The Politically Incorrect Guide to Islam (and the Crusades)