The Prince of Darkness: 50 Years Reporting in Washington 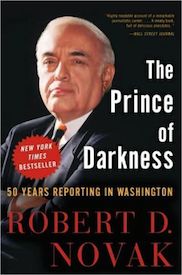 Robert Novak has been embroiled for several years now in the Valerie Plame CIA leak scandal, but decades before anyone had ever heard of Plame, Novak had established himself as one of the leading political reporters in America — and among those most likely to spark controversy. Now, in this massive, brutally honest and gripping memoir, Novak tells all not only about his role in the Plame affair, but about his decades of revealing encounters with some of the most powerful people in the world. In “The Prince of Darkness: 50 Years of Reporting in Washington,” Novak tells the whole captivating story of his remarkable life and career. Novak offers an adventure-packed half-century of stories, scandals, and personal encounters with Washington’s most powerful and colorful people.

An insider’s insider, Novak has lived and worked among the movers and shakers – virtually all of whom he has known personally — since the days when Washington was a sleepy southern town and journalism was built on personal relationships (which were often sealed with copious amounts of liquor). The first president he covered was Harry Truman, and he has been in Washington ever since, breaking a huge number of big stories – many of which dwarf the Plame affair in importance. With good humor and a vivid storyteller’s touch, Novak here reveals the extraordinary transformations that have fundamentally remade Washington, politics, and journalism — and his own key role in those transformations.

Now that years have gone by and long-ago controversies have cooled, Novak opens up, telling the stories behind the stories. He vividly recalls encounters with the Kennedys (angry meetings with Bobby, a scary ride home in Jack’s convertible), his unusual relationship with Lyndon Johnson (who hosted Novak’s wedding reception and who, “drunk as a loon,” had to be carried out of a bar by the young newsman), and his first meetings with George W. Bush — at which the veteran journalist seriously underestimated the future president. He introduces numerous other fascinating characters as well, from George Wallace (who confided in Novak his dismay and disappointment in his running mate during his 1968 presidential bid) and Tip O’Neill (who routinely greeted Novak with a friendly cuff on the head) to Ronald Reagan (who stunned Novak and his partner Rowland Evans during an interview by citing obscure philosophers and decades-old budget statistics from memory), Alexander Haig (who threatened to sue Novak for five million dollars) and Dan Quayle (who misspelled Novak’s name on a photo he inscribed for him).

With refreshing candor, Novak reveals how politics and journalism really operate at the highest levels, both publicly and behind closed doors. He is also frank about his personal experience, writing forthrightly about the days when his drinking matched the boozy culture of Washington. He reflects also on his political journey to the right, and on his spiritual journey, from his early life as a secular Jew to his conversion to Catholicism at the age of sixty-seven.

Packed with riveting, never-before-told stories, The Prince of Darkness is a hugely entertaining and equally perceptive view of fifty years in the life of Washington and the people who cover it.