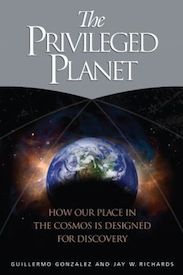 Well, not at the geographical center — but here is proof that one of the most cherished assumptions of materialism, that Earth is an insignificant dust speck in an obscure corner of the universe, is dead wrong. “The Privileged Planet: How Our Place in the Cosmos is Designed for Discovery” provides proof that Earth is a lot more significant than virtually anyone has realized — except for tenacious post-Copernican theists.

Guillermo Gonzalez and Jay W. Richards present mountains of evidence that exposes the hollowness of today’s scientific orthodoxy. They demonstrate that Earth is carefully designed not only to support life, but to give us the best possible view of the universe — as if the great Designer of the cosmos wanted to help us discover His handiwork. Their investigations are wide-ranging, covering star probes, the physics of the moon, polar ice cores, plate tectonics, our neighboring planets, and much more. Gonzalez and Richards also set out the explosive implications of the facts they present here, and even answer sixteen common objections to the idea that Earth is the product of design.

The Privileged Planet’s astounding findings should lead any open-minded individual to reevaluate entrenched assumptions about the universe — and even to reconsider our very purpose on what so many have dismissed as a tiny speck orbiting an inconsequential star in one galaxy among billions. As such, this book is a direct and enormously valuable challenge to one of the key foundations of the philosophical relativism that plagues the Western world today. Among the revelations: