The Swamp: Washington’s Murky Pool of Corruption and Cronyism — and How Trump Can Drain It 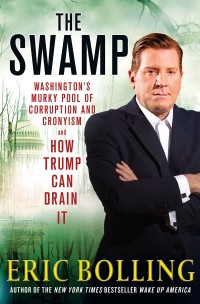 Eric Bolling isn’t afraid to give the dirty details of the scandals throughout this country’s history.  His new book, The Swamp: Washington’s Murky Pool of Corruption and Cronyism and How Trump Can Drain It looks at a wide swath of the Swamp’s corrupt dealings in chapters on sex in the swamp, brawling in the house, foreign entanglements, lobbying, and more. He holds back no punches as he exposes the illegal and illicit activities that have been overlooked for too long.  Like Donald Trump with his tweets, Bolling isn’t afraid to name names and call out the scoundrels!

Bolling’s short and witty writing style makes it a breeze to read through the history of sex scandals and Congressional cane beatings that have faded from the American conscious. Recognizing that the Monica Lewinsky Blue Dress scandal of the 1990s was only one of the more prominent Swamp sex scandals, Bolling puts it into conversation with Thomas Jefferson’s long-lasting affair with his slave, Sally Hemmings, Mark Stamford’s adventures “hiking the Appalachian trail” and Eliot Spitzer’s habit of wearing black socks while soliciting prostitutes.

Bolling jumps through history from the founding of this nation to its most recent presidential election with ease, tying together seemingly disparate corruptions like pharmaceutical lobbyists and their Porsche habits with the skimming of money by the customs collector of New York under Andrew Jackson.

Though the majority of the book focuses on the scandals and the scoundrels of the Swamp, Bolling does attempt to offer some suggestions to President Trump on how to keep his campaign promise to “drain the swamp,” including establishing congressional term limits, cutting regulations,  supporting localized government, and a continuation of Trump’s much-talked about Twitter account. After Bolling spent so many pages detailing the immoral and violent tendencies of the Swamp creatures, as he affectionately calls them, it would have been quite effective for him to offer insight into requiring Congressional leaders to pass a basic background check or be held accountable for their DUIs. Instead, he prefers to offer big pictures solutions to tackle the corruption of the

As it promises, this book will both intrigue and infuriate you. Did that really happen on the floor of the Senate? Did he really admit to that sex act with that woman?  How can it be legal for Congressional leaders to get out of a DUI by saying they are on their way to vote? Who do I need to call to make sure these so called “leaders” are held accountable?

Bolling explores all those issues and more in this book, which is just as much a scandalous history lesson as an insight into how Washington is really run. You’ll close this book in a state of shock over the dirty history of the Swamp and crying for the Swamp to be drained immediately, something Bolling clearly hopes Trump will accomplish with his presidency, perhaps using Bolling’s own suggestions.

If you like this book and want to learn more about the corruption plaguing our nation’s capital and it’s leaders, you should also check out Drain the Swamp: How Washington Corruption Is Worse than You Think by Ken Buck.