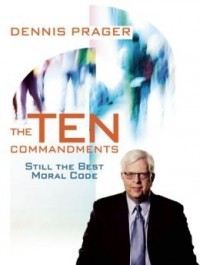 In the Federalist Papers, James Madison stated, “If men were angels, no laws would be necessary”. This statement made clear his understanding of the flaws of human nature. However, Madison and other Founding Fathers firmly believed that laws alone were not enough, and that moral and virtuous citizens were necessary to build and sustain a free society.

To this end, and to preserve the consistency and integrity of moral behavior, early American institutions embodied Judeo-Christian beliefs and formed a common foundation based on this fundamental principle of divine law.  Fast-forward to 2015 and we see that something has gone wrong.  Very wrong.

In The Ten Commandments: Still the Best Moral Code, Dennis Prager, syndicated radio talk show host and bestselling author, provides a clear and concise argument for modern society’s return to the moral behavior necessary for a peaceful way of life. The Ten Commandments were never meant to be complicated, and Prager uses direct and convincing language to inform and remind readers that there is no other set of laws that can provide such a firm foundation in this tumultuous world of ethical ambiguity and moral decline.

In a concise introduction, Prager is unwavering in his argument that adherence to the Ten Commandments remains the only way forward for a peaceful and free society.  In addition, the concept of divine law, including the belief that the Ten Commandments were given by God, makes it clear that these rules of conduct are superior to any edicts of man, no matter one’s position of power and authority.

Throughout the book, Prager argues that despite several centuries of gross misinterpretation and outright denigration, the Ten Commandments endure. In a succinct and direct manner, he goes on to clarify the moral code in each of these Commandments, engaging and inspiring the reader each step of the way. In addition, in an effort to counter some modern criticisms and perceived contradictions, the author relies on original Hebrew text to make his point that each commandment remains relevant in the modern world.  This is never more evident than in Commandment VI, where Prager makes clear the distinction between the terms “murder” and “kill”, with the former being defined as “the illegal or immoral taking of human life”. This clarification of terms counters the argument that capital punishment, among other forms of “killing”, violates the teachings and tenets of the Bible. Prager is careful to acknowledge and respect the opposing beliefs of others, but makes it clear these arguments are not Bible-based.

In The Ten Commandments: Still the Best Moral Code, Prager summarizes: “We live in a world of moral confusion. There is only one way out:  affirmation of a God Whose primary demand of us is that we treat our fellow human beings decently. . . And any moral system that is detached from God, no matter how noble and sincerely held, will [ultimately] fail”. This book offers a bold and concise charge for a return to the moral code of the Ten Commandments. One is left with a refreshed and renewed sense of moral direction.

At the same time, the reader may begin to ponder the lingering question of how to revive the institutions that embody the moral code of the Ten Commandments, including our houses of worship, families, schools, and communities. Despite this daunting task ahead of us, this book reminds us that the divine laws of the Ten Commandments, now and in the future, are the only way forward to a moral and virtuous society.