Conservative Book Club » History » The Triumph of William McKinley: Why the Election of 1896 Still Matters

The Triumph of William McKinley: Why the Election of 1896 Still Matters 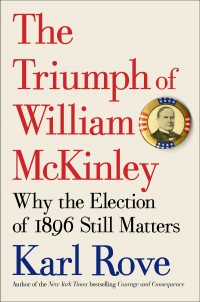 Karl Rove, the man hailed as “The Architect” of George W. Bush’s election as president, has a message for the Republican Party in 2016: It’s time to go back to the future.

In The Triumph of William McKinley: Why the Election of 1896 Still Matters, Rove perceptively explains how  soft-spoken Ohioan William McKinley used a commitment to principle and an ability to get along with nearly everybody to succeed as a member of the House, as Governor of Ohio and finally as a presidential candidate.

He did not do it the way it was usually done in the 19th century. McKinley eschewed the way of the bosses at a time when bosses ran the party, without ever seriously offending those men who were key to political advancement.

McKinley’s great personal triumph, and there were many – the book could have been called the “Triumphs of William McKinley” – was to transform the nature of politics, from one driven by often corrupt state organizations into one driven by candidates and their own campaigns.

Mark Hanna, McKinley’s friend, mentor, and manager, was a boss of a different kind, dedicated to the advancement of his chosen candidate, rather than of the party machinery. Historians often give Hanna outsized credit for McKinley’s success. But Rove – the political operative – stresses that is was the candidate, not the operative, who was responsible. The “essential difference between McKinley and Hanna,” Rove writes, was that “McKinley knew there are no permanent enemies in politics.”

And when he needed friends, he had them (even if they weren’t always friendly). McKinley was able to win over New York’s Thomas Platt, known as the “Easy Boss” for his seemingly benign manner. “Behind his unflappable exterior was a man who settled scores,” writes Rove. He never really won over his Ohio GOP rival, the relentlessly ambitious Joseph Foraker, but he was able to neutralize him.

How McKinley did all this is the heart of Rove’s story. When it came down to it, McKinley always ran as a man of policy and principle, and never as a man of pure ambition or vindictiveness.

As might be expected, Rove is at his best in detailing the back-room maneuvers of the candidates and their cohorts. But he also clearly and concisely explains the arcane debates about currency and tariffs that dominated the Gilded Age.

But this is a book about politics, not policy, and in that it succeeds as both history and parable.

It was an era when newspaper publishers and editors still wielded plenty of clout in the Republican Party (New York Tribune publisher Whitelaw Reid was the party’s vice presidential candidate in 1892). Reid lost on the ticket that included incumbent President Benjamin Harrison. McKinley’s 1896 campaign essentially started the day after Election Day.

He ran, in Rove’s telling, “the first modern presidential primary campaign, presaging the twentieth-century emphasis on candidates, not party machines.”One hundred and twenty years later, Rove insists, McKinley’s model is still valid, and one he recommends as a path to victory.

McKinley’s 1896 victory over Democrat William Jennings Bryan smashed the old coalitions that had existed since the Civil War and reconfigured the narrowly divided electorate. That reshaping established a Republican dominance that lasted until the Great Depression.

In today’s polarized political climate, Rove concludes, “McKinley’s campaign matters more than a century later because it provides lessons either party could use today to end an era of a 50-50 nation and gain the edge for a durable period.”

Original CBC review by John Bicknell. John Bicknell is executive editor of Watchdog.org and author of America 1844: Religious Fervor, Westward Expansion and the Presidential Election That Transformed the Nation.