Things That Matter: Three Decades of Passions, Pastimes and Politics 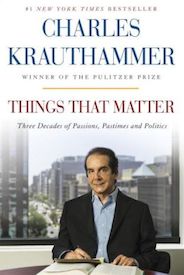 Whoopi Goldberg: Obama’s been called a lot of things these days, and conservative and now former psychiatrist, Charles, how do you say, Kraut-heimer? calling President Obama a narcissist.
Rosie O’Donnell: Who is that guy?  I’ve never heard of him.
Nicole Wallace: Charles Krauthammer is a god in our world.

In last week’s season premiere of the always superfluous TV show The View, which frequently opines on the daily political vine, revealing statements are made by liberal co-hosts Goldberg and O’Donnell, but even more illuminating and all the more true from its newest Republican co-host and former Bush communications director, Nicole Wallace.  For if there is a living god in the world of conservative punditry, Charles Krauthammer sits atop the pantheon.

Charles Krauthammer, the weekly syndicated columnist in over 400 newspapers and evening commentator on Fox News’ Special Report with Bret Baier, offers his first book in 28 years, titled Things That Matter: Three Decades of Passions, Pastimes and Politics.  American-born, raised in Montreal, formerly a psychiatric physician and Walter Mondale-supporting Democrat turned Reaganite, Krauthammer has become the intellectual thorn in the side of President Obama, even being dubbed “Critic-in-Chief” in a 2009 National Review cover article.

Things That Matter is a selected collection of Krauthammer’s best writings throughout the last thirty years taken primarily from his work with The Washington Post, Time, New Republic and The Weekly Standard.  It is divided in four parts, sixteen chapters and ninety essays.  Based on the title, what matters to Krauthammer?  From his introduction:

“What matters?  Lives of the good and the great, the innocence of dogs, cunning of cats, the elegance of nature, the wonders of space, the thrown outfield assist, the difference between historical guilt historical responsibility, homage and sacrilege in monumental architecture, fashions and follies and the finer uses of the F-word.”

In addition to these topics, Krauthammer discusses everything from the personal, political, historical and global, from the serious exploration of the relationship between man, God and politics, to the polemical, including essays titled “Don’t Touch My Junk,” “Myth of the Angry White Male,” and “In Defense of the F-Word.”  He also includes work that has influenced the national debate in America coining the terms “The Reagan Doctrine” and the psychotic state of those who suffer from “Bush Derangement Syndrome.”

Some may be disappointed to learn this is not a complete collection of Krauthammer’s “Best of Political Commentary,” as the first few chapters and many throughout delve into the personal and nonpolitical pastime interests of its author.  But like conservative icon Bill Buckley’s autobiographical memoir Miles Gone By: A Literary Biography, these same people will be surprised at the whimsical and soulful nature of the nonpolitical topics covered; it will almost feel like sipping from a crisp, sparkling glass of champagne.

Krauthammer is certainly prodigious in thought and known primarily for his commentary on issues of national security, foreign policy and the “unipolarity” of America’s role in the world.  He saves the best for last in his final chapters and covers topics including the post-Cold War world, “Democratic Realism” and quite poignantly stated, “Decline is a Choice,” referring to America’s leaders’ departure from America’s exceptionalism.

The wide breadth of topics and elaborate nature of this collection will no doubt remind all why Krauthammer is considered “America’s preeminent columnist.”  Few on the left have even come close to the prodigiousness of Krauthammer and will certainly rouse the Goldbergs and O’Donnells of the world who are first meeting his acquaintance.