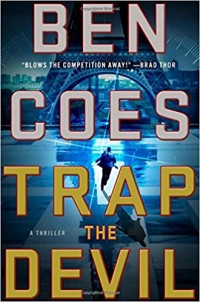 The threat of Islamic terrorism has to be handled, and a clandestine group of former soldiers and spies have taken it upon themselves to oust the current administration in order to decimate the threat at hand.  Seemingly ripped from the headlines, Ben Coes’ latest installment in the Dewey Andreas novels holds no punches as it jumps around the United States, Europe, and the Middle East chasing rogue agents, wealthy businessmen, escaped sanitarium patients, and terrorists. You’re never as far away from a threat as you think you are when you’re trying to Trap the Devil.

Full of action-packed kills and chases, this book is a page-turner. Coes knows how to keep his reader engaged with fast-paced action, dialogue that gets directly to the point, and twists and turns in every chapter. The second you think you’re safe, you’re killed. The plethora of characters in this nearly five-hundred page book are woven together in a web of conspiracy, deceit, and revenge and it culminates in a high-intensity face-off on a train barreling through a blizzard on its way to Frankfurt that you won’t be able to stop reading. The detail that is paid to every move on the train packed with conspirators and spies and terrorists and civilians is remarkable.

The threat of Islamic terrorism is put on the table as the book opens, with a terrorist attack in a Madrid train station killing many, including a nine-year-old girl, the daughter of an Agent. Though the rest of the novel does not feature a prominent terrorist attack by ISIS or Al Qaeda or any known Islamic terror group, it is clear that the drive to eradicate Islamic terrorism and more bluntly, Muslims, is what is driving the conspiracy that now has Dewey Andreas in its crosshairs.

How many people do you have to kill to become president? What order should you do the killings in to make sure that the appropriate line of succession is maintained and that no one gets tipped off to the conspiracy before it accomplishes its mission? These are questions that the members of Order 6, a secret underground group from within Consular Operations, ask themselves as they prepare to make a run for the White House in a very violent manner.

If you’ve been a fan of the previous six Dewey Andreas books, you’ll love the way that Coes intertwines the previous threats against Dewey, his enemies and his accomplices, into this action-packed seventh installment. What happens when a secret agent, an Al Qaeda leader, an Iranian hit team, and a trained US assassin get on a train? It may sound like the lead up for a bad joke, but it leads to one of the most intense sections of the book, and proves that Coes knows how to bring back players from the past and make them relevant in the present.

This novel is perfect for fans of Brad Thor, Brad Taylor, and Vince Flynn, and will leave the reader wondering just how far the men in charge would go to stop Islamic terrorism, and how far is too far.