Trickle Down Tyranny: Crushing Obama’s Dream of the Socialist States of America 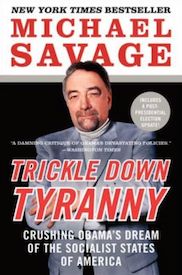 It is hard to suppress a frisson of excitement associated with doing something illicit when opening Trickle Down Tyranny. Successive British governments have banned its author, Michael Savage, from entering the country on the grounds that he preaches hate. This is despite the fact that the American authorities have never prosecuted the conservative “shock jock” for such an offence in his home country.

Certainly it does not take long to see that Trickle Down Tyranny is no classic. It does not stand alongside The Adventures of Huckleberry Finn, The Color Purple or The Grapes of Wrath even though all have suffered censorship in the past. It is also clear that Savage’s views are deeply controversial. He is passionately hostile to Islam, argues that America should not have supported the overthrow of Egypt’s President Hosni Mubarak and rejects the view that climate change is a problem.

Whether such views should be suppressed is a different matter. The case for banning him rests on the assumption that potential readers are so feeble that contact with his ideas could make them commit violence. In any case, reading the works of Savage and his ilk can help put broader social developments into context.

Reading Trickle Down Tyranny is much like watching a grainy black and white documentary from about 1950. His hysterical anti-Communism is reminiscent of the Cold War at its McCarthyite peak.

The twist is that he is talking about today. In Savage’s schema Barack Obama is the new Lenin. This is not a rhetorical flourish but a central theme of his work.

In many respects Savage’s thesis is reminiscent of traditional anti-Semitic conspiracy theories. He sketches a world in which the American president is simply a puppet of international financiers intent on imposing world government. George Soros and Goldman Sachs are particular targets for Savage’s ire.

To be fair to Savage, he emphasises he is staunchly opposed to anti-Semitism itself. He is also an uncompromising defender of the state of Israel. There is no talk in his work of any compromise with the Palestinians.

At the centre of Trickle Down Tyranny, therefore, is a conspiracy theory in which the wealthy, and financiers in particular, are duping ordinary Americans. Time and again he emphasises the huge gap between Wall Street, along with its corrupt allies, and regular citizens.

Readers who instinctively react against Savage’s ultra-conservatism would do well to pause here. Strip out the archaic anti-Marxist rhetoric, put aside his more controversial positions, and the thrust of Savage’s conspiratorial thesis is widely accepted across the political spectrum.

There is a pervasive sense among American citizens of all stripes that they are detached from the nation’s rulers. The gap is perceived to be both social and economic. This theme is as central to the Tea Party as it is to Occupy Wall Street activists.

Take Matt Taibbi’s Griftopia as an example from the other end of the political divide (reviewed in the March 2011 issue of FT Wealth). His description of Goldman Sachs as “a giant vampire squid wrapped around the face of humanity” was praised as a vivid metaphor that captured an important truth. Yet in essence his argument is the same as the much-derided Savage. Both see Wall Street parasites sucking the blood out of contemporary America.

Nor are such views confined to either end of the political spectrum. Polling by the Pew Research Center, a non-partisan organisation based in Washington DC, shows a very large majority of Americans agree with the statement that in the US “the rich get richer and the poor get poorer”. A parallel trend it found was for governments to be seen as catering for the rich and powerful.

This gulf between a wealthy elite and the rest needs urgent public debate. Dismissing it as a matter to be handled by politicians only reinforces the pervasive sense of social disengagement. No doubt many will prefer to ignore the warning signs or even shut down debate completely as it is too uncomfortable. Such a failure to tackle the issue can only stir up an even stronger sense of resentment for the future.

Book Review from The Financial Times, by Daniel Ben-Ami