Washington and Hamilton: The Alliance That Forged America 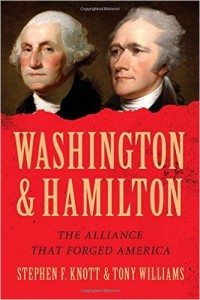 When it comes to the romance and legend of America’s birth, the pendulum of perception tends to swing from idolizing the Founders’ high-mindedness, to demoting them in scandal. As can be expected, those who comb through the annals of reality find a more complex and indeed fascinating picture.

Stephen F. Knott and Tony Williams hone in on one overlooked aspect of the 18th century political phenomenon in their book, Washington & Hamilton: The Alliance That Forged America. The wealthy, temperate, southern agrarian George Washington and the Caribbean-born, ambitious, northeastern urbanite Alexander Hamilton were societies, personalities, and a generation apart, but united by a shared vision for a “continental republic.” In American form, Hamilton was the Joshua to Washington’s Moses, and both of their remarkably influential lives exited the stage prematurely.

“What makes Washington and Hamilton unique from these other founding collaborations was that their bond was forged in the crucible of the Revolutionary War,” write Knott and Williams. “Unlike their contemporaries, Washington and Hamilton saw war up close and personal; they were brothers in arms in a sense, and as any combat veteran will attest, battle is a bonding experience like no other.” This was no hunky-dory bromance (Washington can hardly be imagined to have had such a friendship with anyone as it is), and it doesn’t seem like much of an alliance in the first few pages, while their early wartime spats read like a stressed father regrettably exasperating a stiff-necked son.

Yet Washington, a wise executive but not natural intellectual, developed a complementary relationship with the more academically-minded Hamilton, who could interpret French and be trusted to write and sign Washington’s letters on his behalf. Hamilton in turn benefited from Washington’s virtuous guidance and prominence.

This alliance carried beyond military victory and into the most important debates in the development of the United States federal republic, with Washington lending irrefutable leadership to Hamilton’s political philosophy. Eventually, Hamilton became the first cabinet appointment of the first American president, and in this age before staffers played the role of speechwriter for Washington’s iconic state of the union and farewell addresses. Pundits might have called Hamilton “Washington’s brain” if they worked in these times, and Knott and Williams make it clear that such an assessment would be wrong. Neither statesman was a puppet for the other, and Washington didn’t always take Hamilton’s side in administrative disputes.

Why has this special relationship been overlooked in the study of American history? “Washington and Hamilton’s correspondence is more focused on pragmatic problem solving, it’s a little more prosaic instead of poetic, and academics I think tend to be drawn towards the philosophical or the poetic,” Knott explains in a History Author Show interview. “I just don’t think this relationship has been given its due, and part of what Tony and I were attempting to do was correct that historical oversight or historical distortion…we firmly believe that this was the critical relationship despite the fact that they had their occasional falling outs. Without these two men, I don’t see the federal government, I don’t see the Constitution, I don’t see the American Revolution succeeding,” says Knott.

Nothing is sugarcoated in their theory, and more character growth is depicted than one would expect in textbook nonfiction. Washington isn’t only a hero – indeed, he’s rather vain, self-centered, and hotheaded in the beginning. Hamilton is more than a flamboyant scoundrel, witnessing firsthand and denouncing the evils of the slave trade, overcoming an illegitimate parentage with his precocious work ethic, and ending as a repentant and grieving husband and father who consciously walked into an untimely death. This book highlights the egotistical side of Thomas Jefferson, whom we traditionally know as the powerful yet demure penman.

The nasty fights between all of the Founding Fathers, littered with tyrant-related slurs, are surprisingly similar to the way our political candidates who are supposed to be friends have at it today, albeit with a better command of Shakespeare and the classics. As we acquire greater knowledge of the Founders, we may like them less, but love them more, as it becomes apparent that each and every one was needed for their role in the creation of our unique federal republic.

Knott and Williams’ Washington & Hamilton is an important contribution to this conversation, with an excellent assortment of endnotes and primary source collections in the bibliography. There are other parts of the story witnessed by the protagonists that will likely pique the history reader’s interest – like George Mason’s call to boycott the British slave trade, and a colonial governor dissolving the House of Burgesses to condemn a resolution of prayer and fasting. But of course, it’s the conjoined biographies of unlikely yet well-suited allies that provoke the most thought.

“In the end, it is clear there was a genuine bond between the pair,” write Knott and Williams, “and together they defeated the superpower of their day and founded a nation that became the superpower of our time.”