Who Built That: Awe-Inspiring Stories of American Tinkerpreneurs 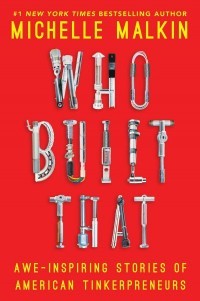 Michelle Malkin’s latest bestselling book, Who Built That–Awe Inspiring Stories of American Tinkerpreneurs, is 247 pages of fascinating stories about the “tinkerers” who invent things and bring them to market with an entrepreneurial passion.  She then “frosts” the work with 50 pages of illuminating notes and references.

She describes herself in this book as, “The angry brown lady on TV who is always yelling at liberals,” but her stories here are real-life examples over the past two hundred years of people who often had little except an idea and the ambition to work tirelessly to realize the American dream.  Many are legal immigrants who are thrilled that in America, unlike in their countries of birth, our government largely welcomed their drive, their inventions, and their effect on wealth creation in our growing nation.

Malkin’s stories, scrupulously researched, are the antithesis of Barack Obama’s July 2012 statement that “If you have a business, you didn’t build that. Somebody else made that happen.” Proving President Obama flat wrong Malkin details the “espirit de tinkerpreneur that infuses the air we breath, the clothes we wear, the food we eat, the medicines that prolong and improve our lives and the spaces in which we live, travel, work, and play.” Without any doubt, these are businesses built with blood, sweat and tears by these inventors.

She details many examples, including those who invented air conditioning that first helped warm premature babies and later made our hottest cities livable, and steel cables that made mighty bridges possible spanning raging rivers (and allowing greater commerce) all get a special place of honor in her book as the “engineers of prosperity.” But she goes on to detail the people who, through perseverance, sacrifice and ingenuity built and made fortunes with the “mundane”: better toilet paper, bottle caps, razor blades and even root beer floats!

Here is a book about the genius of the entrepreneur who, seeking a better life, creates innovation, jobs and wealth. It is an American story that makes clear that despite union sabotage, financial challenges, government hostility and production and marketing barriers, our free society was the garden in which a dream could be grow and in that fertile soil, the standard of living rose for the benefit of all.

This central lesson in this book is that it is the ideas, optimism and the drive of citizens that have made America strong and wealthy. Their fascinating and eye-opening stories fill the pages of Malkin’s book as examples of how they prospered and how that led, in turn, to our prosperity. Her political “frame,” passionately presented, is that these stories rebut liberal hatred of those who work hard and find success. Malkin doesn’t hate these inventors, she celebrates their spirit and their belief in our “land of opportunities”.

Malkin concludes with a call to protect and restore what our Founding Father’s understood: “the power to make money is the power to do good.” And she quotes scholar and historian Arnold Tonybee who warned “civilizations die by suicide, not by murder,” and then goes on to detail our current government’s antipathy toward those  who would invent and grow their own fortunes…and our economy.

Malkin has presented evidence that “liberty, not government, is the world’s most powerful wellspring of innovation.” She has done this with real life examples that are easy to read and can inspire a new generation of “tinkerpreneurs.”