Conservative Book Club » Economics & Free Markets » Who Really Cares: America’s Charity Divide – Who Gives, Who Doesn’t, and Why It Matters

Who Really Cares: America’s Charity Divide – Who Gives, Who Doesn’t, and Why It Matters 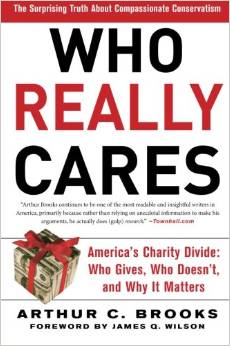 When President Bush coined the term “compassionate conservatism,” many conservatives were understandably miffed. It seemed to concede to liberals that traditional conservatives are indeed a greedy, selfish bunch – unlike liberals, with their “commitment” to the poor and disadvantaged. Now comes an amazing new book that buries that old canard forever. In “Who Really Cares: America’s Charity Divide – Who Gives, Who Doesn’t, and Why It Matters,” Arthur C. Brooks uses hard data to prove that, when it comes to charitable giving, conservatives – especially religious conservatives – are far more generous than liberals, who seem to believe that “compassion” begins and ends with voting for government handouts.

When Brooks started his research, he fully expected to find that political liberals would be the most privately charitable people. When early findings led to the opposite conclusion, he assumed he had made an error. He re-ran analyses and got new data, but in the end he had no option but to change his views. It seems that many of those who say that charity is the responsibility of private individuals instead of governments truly practice what they preach. Brooks also identifies the forces behind American charity: strong families, church attendance, earning one’s own income (as opposed to receiving welfare), and the belief that individuals-not government-offer the best solution to social ills.

Get the data and documentation behind these and many other revelations in “Who Really Cares”:

In short, “Who Really Cares” demonstrates conclusively that conservatives really are far more compassionate than their liberals – and that charity matters, not just to the givers and to the recipients, but to the nation as a whole.

“This remarkable book documents the dramatic gap between those who talk about caring and those who actually care. The shattering of stereotypes will be as upsetting to some Americans as it will be encouraging to others.”—The Rev. Richard John Neuhaus, editor-in-chief of First Things

” ‘Who Really Cares’ is not just about how we contribute time and money; it is also about how our culture may affect our politics and our economy. It is the best study of charity that I have read, and I think you will think that as well.” —From the foreword by James Q. Wilson