Who’s Counting?: How Fraudsters and Bureaucrats Put Your Vote at Risk 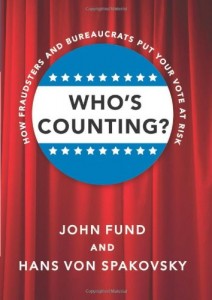 The 2012 election will be one of the hardest-fought in U.S. history. It is also likely to be one of the closest, a fact that brings concerns about voter fraud and bureaucratic incompetence in the conduct of elections front and center. If we don’t take notice, we could see another debacle like the Bush-Gore Florida recount of 2000 in which courts and lawyers intervened in what should have involved only voters.

Who’s Counting? will focus attention on many problems of our election system, ranging from voter fraud to a slipshod system of vote counting that noted political scientist Walter Dean Burnham calls “the most careless of the developed world.” In an effort to clean up our election laws, reduce fraud and increase public confidence in the integrity of the voting system, many states ranging from Georgia to Wisconsin have passed laws requiring a photo ID be shown at the polls and curbing the rampant use of absentee ballots, a tool of choice by fraudsters. The response from Obama allies has been to belittle the need for such laws and attack them as akin to the second coming of a racist tide in American life. In the summer of 2011, both Bill Clinton and DNC chairman Debbie Wasserman Schultz preposterously claimed that such laws suppressed minority voters and represented a return to the era of Jim Crow.

But voter fraud is a well-documented reality in American elections. Just this year, a sheriff and county clerk in West Virginia pleaded guilty to stuffing ballot boxes with fraudulent absentee ballots that changed the outcome of an election. In 2005, a state senate election in Tennessee was overturned because of voter fraud. The margin of victory? 13 votes. In 2008, the Minnesota senate race that provided the 60th vote needed to pass Obamacare was decided by a little over 300 votes. Almost 200 felons have already been convicted of voting illegally in that election and dozens of other prosecutions are still pending. Public confidence in the integrity of elections is at an all-time low. In the Cooperative Congressional Election Study of 2008, 62% of American voters thought that voter fraud was very common or somewhat common. Fear that elections are being stolen erodes the legitimacy of our government. That’s why the vast majority of Americans support laws like Kansas’s Secure and Fair Elections Act. A 2010 Rasmussen poll showed that 82% of Americans support photo ID laws.

While Americans frequently demand observers and best practices in the elections of other countries, we are often blind to the need to scrutinize our own elections. We may pay the consequences in 2012 if a close election leads us into pitched partisan battles and court fights that will dwarf the Bush-Gore recount wars.