Why I Turned Right 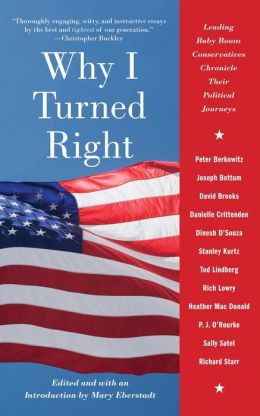 Whichever party currently holds majority power in Congress, whatever the outcome of the 2008 elections, the United States as a whole has unquestionably moved to the right. How did a conservative movement that appeared sidelined and embattled only a generation ago come to exert such influence that even the Democratic Party now tacks starboard? What accounts for the unprecedented growth and reach of right-leaning think tanks, magazines, television and radio? What, in short, has been happening out there that so many Americans are now comfortable with the conservative label – or conversely, so hostile to contemporary liberalism? “Why I Turned Right: Leading Baby Boom Conservatives Chronicle Their Political Journeys” is a unique attempt to answer these questions in the most practical and informative way possible: via the unfiltered voices off a dozen leading authors and editors of the contemporary right – including:

All these authors represent the venues through which many conservative ideas are conceived and disseminated – journals such as National Review, The Weekly Standard, and First Things; think tanks such as the Hoover Institution, the American Enterprise Institute and the Manhattan Institute; “alternative” media like Fox News, nationalreview.com, and many other blogs and websites followed by conservatives. Thus, these contributors represent in miniature the generation now peopling the right-leaning think tanks and airwaves and internet and book and magazine publishing – in a word, some of the human nuts and bolts of what Hillary Clinton once disparaged as “the vast right-wing conspiracy.”

Each of these authors explain how they came to reside on the conservative side of America’s red-blue divide – in some cases, to their own surprise. For some, like Richard Starr, the answer begins in foreign policy – or rather in the excruciating national humiliation that they associate with the Carter administration. For others, like P.J. O’Rourke, it was the (sometimes personal) devastation brought on by the sexual revolution – and, on the “flip side” of that, the political effect of becoming a parent. For still others, like Rich Lowry and Stanley Kurtz, it was the sheer transformative power of conservative ideas. Some, like Joseph Bottum, found themselves moving to the right as they discovered – or rediscovered – religion. And, in addition to these and other motives, nearly all the authors represented were provoked into conservatism by the rigid political correctness they found in academia.

Of course, “conservatism” in America is no monolith, and “Why I Turned Right” reflects that reality, too. The perpetual tug of war between libertarianism and social conservatism, for example, runs firmly between the lines of these essays. Even so, one common denominator holds: each writer left the “default” position of left/liberalism behind to become something else.

“Spotlights why conservatism is the most essential of all political philosophies”

“This collection is something no conservative should live without … brim[s] with useful insights … there is no shortage of worthwhile reading. Dinesh D’Souza’s insights on the historic impact of the legendary campus weekly the Dartmouth Review are worth the price of this collection in themselves. Another delicious read: Heather Mac Donald’s “Down and Out With Paul DeMan,” in which the Manhattan Institute fellow skewers the Nazi-friendly Deconstructionist and those who followed his intellectual lead. … Conservatism is the last redoubt of the realist. And better than any other book in recent memory, Why I Turned Right spotlights why conservatism is the most essential of all political philosophies.” — THE WASHINGTON TIMES