William F. Buckley Jr.: The Maker of a Movement 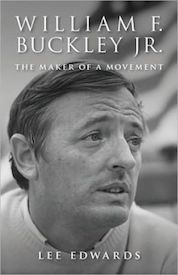 One of the great things I learned about Bill Buckley, while working on his bibliography, is that his memory is remarkably strong and detailed,” William Meehan told me several years ago. “No matter how far back you want to go in his adult life, he remembers everything!” A few weeks after speaking with Meehan, I tested this claim by writing to ask WFB about the source of a humorous quip widely attributed to Russell Kirk: “Eisenhower’s no Communist; he is a golfer,” which Buckley mentioned in The Jeweler’s Eye (1968). He replied to my letter within a few days, saying that Kirk had tossed off the now-famous words in a conversation during one of his periodic visits to New York in the early Sixties. Buckley went on to say that the phrase stuck in his memory and eventually found its way into his book — and into conservatism’s collective consciousness.

This little anecdote is of a piece with what Lee Edwards effectively illustrates in his new book: The late founder of National Review had a knack for being generous with his time; paying his friends, his associates, and even his enemies the courtesy of actually listening to them; remembering what they had said; and responding in a manner that delighted his admirers and deflated (and perhaps schooled) his adversaries. Buckley also tended not to suffer fools and fanatics gladly; thus his and NR’s rough treatment of Ayn Rand as well as the booting of the John Birch Society out of conservatism. (It was Birch Society founder Robert Welch who originally claimed that Eisenhower was a Red, prompting columnist George Sokolsky to write, “Obviously, the former President is not a Communist; he is a golfer: Nor can anyone say that Jack Kennedy is a Communist; he is a Roman Catholic and a member of the Communist Party must be an atheist, a believer in dialectical materialism.” Upon reading these words in 1961, an amused Russell Kirk repeated a reefed-down version of the phrase to Buckley, who assumed the quote was Kirk’s invention.)

As Edwards and others have noted, these acts of purgation cost NR subscribers at a time when subscribers were hard to come by, and gained WFB a handful of enemies on the right who endure to this day. But they rendered NR a movement platform refreshingly free of obsessive ideologues and worrisome numbskulls.

In NR’s formative years, Buckley pulled off a most difficult feat: somehow managing — through a combination of graciousness, cajolery, blarney, and the occasional knocking together of heads — to get a roomful of strong-willed writers and editors from across the spectrum of conservative thought to pull together as something resembling a team. Over time, this team became the nucleus of a movement.

“Buckley clearly had certain goals in mind for his magazine,” writes Edwards, namely to “keep the Republican Party — the primary political vehicle of conservatives — tilted to the right; eliminate any and all extremists from the conservative movement; flay and fleece the liberals at every opportunity; and push hard for a policy of victory over Communism in the Cold War.” As Buckley wrote on one occasion, the goal of conservatism and NR should be to strive for a fusion (a term closely associated with longtime NR literary editor Frank Meyer) of normative elements that make for ordered freedom: “a general consensus on the proper balance between freedom, order, justice, and tradition.” On all these goals Buckley’s editorial colleagues, chief among them Meyer, Kirk, James Burnham, and Willmoore Kendall, were in agreement, though in some areas of conservative thought they tended to disagree with one another.

Indeed, the “circular firing squad” so bemoaned today among conservatives existed, to some extent at least, even during the mid-to-late 1950s. And it existed not primarily because of petty jealousy or spite (although those qualities may have played some role, conservatives being tempted by the same base impulses as other men) but because Buckley and his colleagues sought to clarify and purify the movement at the outset of its mission — and challenged one another as one way of determining its direction.

Thus, the contrarian political scientist Kendall, famously described by Dwight Macdonald as “a wild Yale don who can bring any argument into the shouting stage faster than any man in town,” was given to occasionally calling out traditionalist Russell Kirk in print (but always outside the pages of NR). For his part, the Burkean Kirk refused to lend his name to NR’s masthead, where it would have appeared alongside the names of former Marxists who saw nothing of Edmund Burke in America’s core principles. He was at daggers drawn with the libertarian Meyer for many years, with Meyer believing Kirk’s emphasis upon the “little platoons” of faith, family, and culture to be simply collectivism smuggled into the conservative movement under the warm word community. Burnham, too, a former Trotskyite turned Cold Warrior and advocate of Realpolitik, clashed from time to time with his peers and with Buckley. Burnham believed, for example, that Barry Goldwater was unelectable to the presidency in 1964 and pushed for NR to endorse the liberal Republican Nelson Rockefeller, whom many conservatives, including Buckley, could not abide. Believing that it was the role of NR not only to stop history but also to shape it, Buckley came down on the side of Goldwater, who lost but paved the way for Ronald Reagan.

That sense of taking long views, of prudently building for tomorrow, is a belief Buckley shared with T. S. Eliot — who, by the way, turned down Bill’s invitation to write for NR. It was Eliot who famously wrote that in the world of cultural and political struggle, “we know that our defeat and dismay may be the preface to our successors’ victory, though that victory itself will be temporary; we fight rather to keep something alive than in the expectation that anything will triumph.” We are pilgrims on the earth, here for a time and then gone: Despite his wealth, cheerfulness, and comfortable lifestyle, Buckley knew this. His deeply ingrained and unwavering Roman Catholic faith confirmed to him that men are flawed creatures, given to all manner of behavior; this made for his seldom disclosed sense of pessimism, a sense of life’s desolate pain as loss builds upon loss over time. It is perhaps this Father Brown–like knowledge of the human heart, which Edwards perceptively indicates, that enabled Buckley to be a good friend even to those who strongly disagreed with him.

Which is not to say that he was always William F. Congeniality Jr. He held his friends and allies to account when he disagreed with them — notably the great Ronald Reagan, whom he admired deeply — and he could be ferocious when aroused, as when Sen. Ted Kennedy indulged in his infamous tirade about “Robert Bork’s America” in 1987. To Kennedy’s fulminations about how, with Bork on the Supreme Court, “women would be forced into back-alley abortions, blacks would sit at segregated lunch counters, rogue police could break down citizens’ doors in midnight raids,” and other calamities, Buckley replied with words that retain their thunder still. “Now either Senator Kennedy was drunk when he uttered these lines,” he wrote, “in which case he should not drink before he drives or orates; or else he has proved as irresponsible as any demagogue in the recent history of the United States. . . . Kennedy’s vituperation of Bork is of a class with Goebbels’s vituperation of the Jews.”

And lest the reader come away with the understanding that Buckley held to a Pickett’s Charge brand of conservatism, it is useful to remember that he believed, as Edwards notes, “that if conservatives in politics wanted to be successful they had to steer a middle course between the ideal and the prudential.” The biographer clarifies that this “golden mean” is not “a precise midway point between two extremes; rather it is a shifting point that sometimes winds up closer to the ideal, sometimes closer to the prudential.”

Thus Buckley could on one occasion write, to the dismay of a few on the right, “What conservatives are going to have to get used to is that certain fights we have waged are, quite simply, lost. It is fine, in our little seminars, to make the case against a federal Social Security program, but it pays to remind ourselves that nobody outside the walls of that classroom is going to pay much attention to our Platonic exercises.”

Edwards provides a very effective overview of Buckley’s life and thought, based on extensive research in the archives of Buckley correspondence. It helps that his subject is such a fascinating one, a sparkling presence in American life for so many decades. When WFB first appeared on the national scene, he was demonized and belittled by a statist American intelligentsia. As Edwards shows, Buckley by the end of his life had endured and prevailed, taking the fight to doctrinaire liberalism with Chestertonian zeal and humor, retiring from the field covered with honors and acclaim — and the respect of his bruised opponents. He had his minor faults, including one or two instances of disingenuousness in the crafting of NR’s editorials, rare cases of bet-hedging in determining editorial stances, and an otherwise understandable devotion to Reagan that could sometimes be expressed in near-worshipful terms — unusual for a man renowned for his verbal precision. These blemishes are acknowledged by his biographer, who also makes clear that they were trivial compared with his tremendous gifts. Edwards has provided an insightful, short intellectual biography of a remarkable man whose writings and influence will endure long after the grumblings of his detractors have faded to silence.