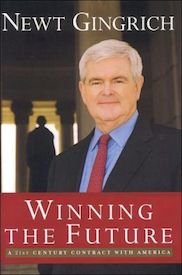 While Speaker of the House, Newt Gingrich spearheaded the Contract with America — which brought us the first tax cut in sixteen years, real welfare reform, balanced budgets, and a strengthened military. In his latest book, he details how (if we have the same persistence and courage that the Republican Revolutionaries showed in the 1990s) we can defeat secularism and liberalism and restore American values. What we need to do so, he says, is a new 21st Century Contract with America.

In “Winning the Future: A 21st Century Contract with America,” Gingrich outlines five chief threats that could cripple our nation in the coming years: most notably Islamic terrorism, the devastating effects of the banishing of religion from public life, and ever-growing government. He speaks forthrightly about how two chief obstacles to meeting these threats effectively are an entrenched political system and a liberal news media that refuses to confront them seriously. These elites, says Gingrich, want a dramatically different world from the values and aspirations of most Americans. But Gingrich shows what must be done to meet each of these challenges — providing, in the process, a comprehensive conservative program for the next decade.

Gingrich explains how we can and why we must commit to a long war to defeat the terrorists who would destroy America; reestablish God in the public arena; insist on sane immigration policies and patriotic educational standards; harness modern science and technology to create jobs; allow for at least a partial privatization of Social Security; bring the Courts back under the Constitution; protect American interests within the world trading system; balance the Federal Budget; bring much-needed reform to Congress; ensure that local and national elections are scrupulously fair; and much more. He even includes a walking tour of Washington, D.C., that will decisively answer any questions you or your liberal friends might have about America’s indebtedness to and reliance upon the Creator from whom all our rights come.

The threats to America that Gingrich outlines here are as daunting and difficult as any America has faced. But if we want to win the future, it’s time to do something about it — and Gingrich’s 21st Century Contract with America is a magnificent place to start.

Some of Dr. Gingrich’s diagnoses and prescriptions: