In the Words of Our Enemies 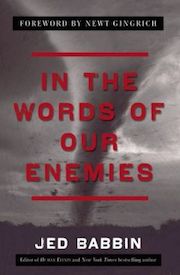 We Americans are great talkers, but not often great listeners. When some dictator or terrorist threatens to end our way of life, destroy our economy, or end our influence in his region of the world, we usually find some way to ignore him or rationalize his statements. That’s what we did with Osama bin Laden in his long, brazenly public buildup to 9/11 — and it’s what we risk doing again with other deadly enemies who are also making their intentions plain. Now, in “In the Words of Our Enemies,” bestselling author Jed Babbin (former deputy undersecretary of defense), exposes the demagogues, dictators, and death squads who openly threaten America — with potentially devastating consequences, if we aren’t alert to the danger.

Here you will find the word-for-word translations of direct threats against our nation not only from more obvious enemies such as Iran and North Korea – but even “allies” and “partners” like Saudi Arabia, China and Russia. Most of what you will read was published openly in languages other than English — the speaker or writer confident that it would not be revealed to those unable to understand the speaker’s tongue. Remember that throughout his murderous career, Yasser Arafat preached peace in English while exhorting his followers to violence in Arabic. Likewise, most of what you will read here was not meant for your eyes.

In the Words of Our Enemies reveals:

“This book is not a call to war or even a war warning,” writes Babbin. “It is, instead, a call to listen, to study, to understand in the context of the complex world in which we live the plain words that our enemies and potential enemies say to us and to each other. It is a reminder to be vigilant. It is, I hope, a searchlight which we can use to penetrate the forest of events that surrounds us and find the narrow paths around the wars that may — like the war against terrorists and the nations that support them — come upon us unaware.”

“If you think we’re not in a crisis, the following record of what our enemies are saying about us should change your mind. Jed Babbin has compiled an invaluable record of what America’s enemies from Osama bin Laden to Hugo Chavez to the radical regimes of North Korea and Iran are saying about their intentions towards us. We’ve been warned. It’s up to us now to make sure we have the leaders necessary to mount America’s defense.” —NEWT GINGRICH

“Osama bin Laden warned us before September 11. But few Americans listened. In this compelling manifesto, Jed Babbin urges his fellow citizens to open their ears and eyes to the words of our enemies worldwide–from Castro and Chavez to the Taliban and the Iranian mullahcracy. Pay attention before it’s too late.” —MICHELLE MALKIN

“My friend Jed Babbin has?carefully compiled the record of what our adversaries write and say about us–and what they intend to do to us. This book is a must-read for?all who understand the first axiom of war:??know your enemy.'” —OLIVER NORTH, Lt. Col. USMC (Ret.)

“What part of ‘We intend to kill you!’ don’t we understand?” As Jed Babbin documents in this sobering and necessary book, our foes around the world—from near-nuclear Iran?to the?insane Kim Jong-il in North Korea—not only chant ‘Death to America,’ but openly outline their plans for a second September 11–only this time,worse. ‘In the Words of Our Enemies’ is a must-read for conservatives, and needs to be highlighted in red and given to every appeasement liberal. Osama bin Laden and company don’t deserve a second chance.” —MARK LEVIN

Tags: In the Words of Our Enemies, Jed Babbin