Your Kids at Risk: How Teen Sex Threatens Our Sons and Daughters 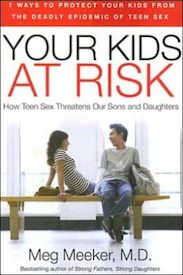 Did you know that 8,000 American teens are diagnosed with a sexually-transmitted disease (STD) every day? That 46% of girls are likely to become infected with a disease after their very first sexual encounter. That, right now, one out of every five adolescents is living with an STD?

If not, you’re not alone. The fact is, America is in the midst of what may be the first “politically incorrect” epidemic in history — one that so contradicts the liberal faith in “sexual freedom” as the path to health and happiness that the media simply refuses to report it. What’s more, reveals Dr. Meg Meeker in this groundbreaking book, it was that very faith — as endlessly promoted by Planned Parenthood, sex-educators, and the media itself — which actually caused the epidemic by encouraging widespread teenage promiscuity.

“Your Kids at Risk” breaks the story that STDs among adolescents has indeed reached epidemic proportions, and is leaving our kids open to deadly infections, infertility and cancer. Dr. Meeker, who has spent the past 20 years practicing pediatric and adolescent medicine and counseling teens, uncovers the facts about this grave health crisis, and the powerful political and other interests that continue to make it worse. A small sampling of her deeply alarming revelations (just the tip of the iceberg!):

“Our Children hear from such authority figures as physicians, teachers, and clergy that they are entitled to their sexual expression and experiences. They are being told that these sexual behaviors are good for them and won’t hurt. Psychologically, spiritually, and medically, those are simply lies. Read Your Kids At Risk and learn how to save yours.”— Dr. Laura Schlessinger

“Important and impassioned … Meg Meeker provides essential and potentially life-saving information to all parents concerned about some of the harsh realities confronting their children.”— Michael Medved

Tags: Meg Meeker, Your Kids at Risk: How Teen Sex Threatens Our Sons and Daughters