You’re Going to Be Dead One Day: A Love Story 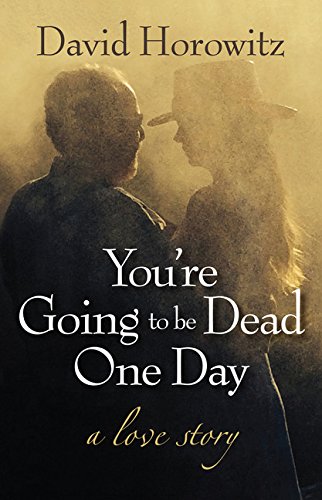 You’re Going to Be Dead One Day: A Love Story is the fourth of what controversial political activist David Horowitz labels his “philosophical memoirs about the lessons to be drawn from our brief journeys on this earth”; with earlier volumes devoted to the purposes to which we devote our time; the untimely death of his beloved daughter Sarah; and a summation of his life’s work in studying those who search for meaning through redemptive politics.

These latest musings are on mortality, occasioned by his thirteen-year prostate cancer, the medical treatments that have brought pain and disability to his life, the loss of his older daughter, and his wife’s near-death experiences.

The title—You’re Going to Be Dead One Day: A Love Story—might strike readers initially as macabre, perhaps.  But the title comes from a specific incident, one that provides the climax to a life redeemed ultimately by his greatest personal love.

Indeed, throughout the narrative, “mortality” itself occupies only a small percentage of pages.  Most of Mr. Horowitz’ reflections instead are on the people and things that engender or envelope or emanate from our greatest loves—the very things that give our fleeting time on Earth any meaning and value.

Marriage and divorce, children and step-children, parents and siblings, careers and education, religion and philosophy, pets, medical treatment, home renovations, finances—it would read as almost a dizzying succession of topics to be covered in such a brief, lightly spaced book.  But instead, it is a calm, even serene work, its many facets unified completely logically, even almost spiritually if you are inclined to see them that way, toward a well-ordered self-portrait of a passionate man who is finding peace with himself after a life of setbacks, disillusionments, regrets, professional strife, and the most painful losses.

You’re Going to Be Dead One Day alternates between accounts of the author’s life during the period that he spent writing the book, to reminiscences of previous events, to general ruminations on the meaning and significance of his ostensible subjects. Horowitz shares how an agnostic can reconcile some of the great mysteries and paradoxes and dilemmas of our existence.  He instructs in one sentence how to live “a charmed life”.  He comes to terms with family and friend relationships that did not turn out as he might have wanted them to be.

If readers are drawn to this book, inevitably it will be because of Mr. Horowitz’ political reputation.  What, then, does You’re Going to Be Dead One Day have to offer to the politically minded individual?  Without subscribing to such banal clichés as “the personal is the political”, we still recognize that our ideological predispositions have their roots in our deeply and intimately personal premises about “the meaning of life”; as Mr. Horowitz describes it, “How should we deal with the deisre to make the world whole, and to make it make sense?”—conclusions that as often as not far, far transcend any ephemeral political battles that we think define us.

So much of Mr. Horowitz’ life’s work has proceeded explicitly from his own personal history deep within revolutionary Leftism, to his eventual philosophical and psychological escape (a “declaration of independence”).  Not surprisingly, ideological politics cannot truly be absent from any memoir of an individual such as Mr. Horowitz, but here, these references tend to be toward the effect of politics on his heart and soul, and his family and friend relationships, rather than the policy judgments and polemical calls to arms that are the hallmarks of his brilliant activist writings and speeches.

It is hard not to detect some hurt in what he recounts of the vilification that has pursued him since he forsook the Left and began to expose their sins:

[My enemies] would claim, for example, that I supported slavery or was a Torquemada intent on suppressing ideas I disagreed with, which were both the opposite of the truth.  In an uglier vein, they said I was a racist and a bigot, and wanted the poor to suffer.  It was patently ludicrous, but that didn’t stop them from spreading their malice across the Internet and other public media.

After you read the account of his wife April’s rescue of a horrifically neglected horse, you will know that any man who would choose such a woman to be his soulmate cannot possibly be the monster of his enemies’ mendacious portrayals.

To a movement that has brought so much misery, suffering, and horror to the world, and unjust grief to his own life, Mr. Horowitz is very charitable:

I have never considered all or even a majority of leftists to be bad people.  The historical narrative has a diabolical twist in which destructive illusions about the future seduce good people into the arms of evil.  Consequently, when people of the left relate to me in a decent way—however rare that may be—I am ready despite all differences to reciprocate.

Maybe this reveals a “secret to survival” that all of us can use.

If you know of David Horowitz mostly as an ideological firebrand—and especially if you admire him for it—then you need to read You’re Going to Be Dead One Day: A Love Story.

Tags: David Horowitz, You're Going To Be Dead One Day