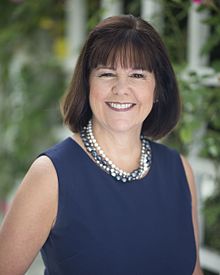 Karen Pence, wife of Vice President Mike Pence, is a mother, educator, and award-winning watercolor artist. As Second Lady of the United States, Mrs. Pence works to bring attention to art therapy and to the sacrifices made by military service members and their families.

Mrs. Pence is the honorary chair of the Art Therapy Initiative at Riley Hospital for Children at IU Health in Indianapolis and is a member of Riley Children’s Foundation. She also serves as a board member for Tracy’s Kids, an art therapy program for young cancer patients.

Mrs. Pence also serves as an encourager to military service members and their families. She has hosted and participated in numerous events to honor and recognize of all of those in the Armed Forces.

Mrs. Pence earned a B.S. and M.S. in Elementary Education from Butler University in Indianapolis. She is a Blue Star mom with a son in the United States Marine Corps. Mrs. Pence and Vice President Mike Pence have been married since 1985 and are proud parents of their adult children, Michael and his wife Sarah, and daughters Charlotte and Audrey.