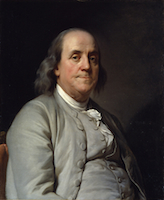 Benjamin Franklin was one of the Founding Fathers of the United States, and is in many ways “the First American”. A renowned polymath, Franklin was a leading intellectual and businessman of the time. As a scientist, he was a major figure in the American Enlightenment and the history of physics for his discoveries and theories regarding electricity. As an inventor, he is known for the lightning rod, bifocals, and the Franklin stove, among other inventions.

Ben Franklin was born in Boston, Massachusetts, one of ten children born to Josiah Franklin and his second wife Abiah Folger. Franklin ran away to Philadelphia at the age of 17, making a name for himself as a printer, newspaper publisher, postmaster, and prodigious inventor.

On returning in 1775 from his second mission to Great Britain, he was unanimously chosen by the Pennsylvania Assembly as their delegate to the Second Continental Congress. In June 1776, he was appointed as one of the Committee of Five that drafted the Declaration of Independence. He served as Ambassador to France from 1776 until 1785, and negotiated the Franco-American Alliance during the Revolutionary War. He served as a delegate to the Philadelphia Constitutional Convention, and is the only Founding Father to serve as a signatory of all four of the country’s major founding documents – the Declaration of Independence, the Treaty of Alliance of France, the Treaty of Paris that ended the Revolutionary War, and the United States Constitution.