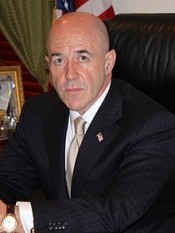 Bernard B. Kerik, is one of the most dynamic, undisputed, controversial and accomplished leaders in law enforcement, correction, and national security in the United States. For more than thirty years, he served his country with distinction, honor, and valor, most notably as the 40th Police Commissioner of the City of New York.

Born in Newark, New Jersey, from unusually humble beginnings, at the age of 3, he was abandoned by his mother, who was found beaten to death when he was 9 years old. A high school dropout, he later volunteered for the U.S. Army, earned his GED, and served in the Military Police Corps in Korea and at Fort Bragg, North Carolina.  There he taught defensive tactics at the John F. Kennedy Unconventional Warfare Center, to U.S. Special Forces and special operations personnel. After his military service, he spent four years in various security assignments in the Kingdom of Saudi Arabia. In  1981, he joined the Passaic County Sheriff’s Department in New Jersey, where he served as the Commander of Special Weapons and Operations and as Warden of the Passaic County Jail.

In 1986, he joined the New York City Police Department where his meteoric rise to the top was historic. Following uniformed patrol and plain-clothes assignments in Times Square, he was promoted to detective and assigned to the narcotics division’s major case unit.  There he earned one of the department’s highest honors, the medal for valor, for a gun battle with a drug dealer who had shot and wounded his partner. In 1991 he was transferred to the U.S. Justice Department’s New York Drug Enforcement Task Force, responsible for overseeing one of the most far-reaching drug investigations in New York history.

For close to six years, Mr. Kerik served as First Deputy and later Commissioner of the New York City Department of Correction.  He was responsible for overseeing the New York City jail system, including Rikers Island, one of the largest and most violent jail systems in the country. Under his command, the department achieved historic reductions in inmate-on-inmate violence, and earned international recognition for violence reduction, efficiency, accountability, and correctional excellence.

In August 2000, Mr. Kerik was appointed the 40th Police Commissioner of the City of New York, responsible for 55,000 civilian and uniform personnel, and a $3.2 billion budget. His term was marked by dramatic reductions in crime, enhanced community relations, and his unflinching leadership and oversight, as he led New York City through the devastating attacks on the World Trade Center on 9/11, overseeing the rescue, recovery and investigation. In 2001, he was one of the founding members of the Board of Trustees of the Twin Towers Fund, which raised and distributed $216 million to over 600 families related the emergency service workers killed on 9/11.

After retiring from the NYPD, and following the fall of Saddam Hussein, Mr. Kerik accepted a request by the White House to lead Iraq’s provisional government’s efforts to reconstitute the Iraqi Interior Ministry, which consisted of its national police service and intelligence, customs and immigration, and border police. He subsequently served as a national security advisor to His Majesty King Abdullah II of Jordan and President Bharrat Jagdeo of the Republic of Guyana. Mr. Kerik has also conducted threat and vulnerability assessments for other heads of state, led crime reduction, national security, and management accountability assessments for the U.S. Justice Department, Trinidad and Tobago as well as Mexico City.

Mr. Kerik is a 5th Degree Master Instructor in the martial arts, studying both Korean and Japanese Karate, and has been inducted into the Centurion Black Belt Hall of Fame. He holds a B.S. in Social Theory, Social Structure and Change from the State University of New York (ESC), has attended the John F. Kennedy School of Government’s Leadership Program for the 21st Century at Harvard University, and is the best-selling author of “The Lost Son: A Life in Pursuit of Justice.”

He has received the President’s Medal from Hunter College and has been awarded Honorary Doctorates from Iona College, New York Institute of Technology, Manhattanville College, College of New Rochelle, and Michigan State University for his public service to the City of New York and United States of America.

Considered one of the most decorated police commissioners in the New York City Police Department, in the line of duty, he has rescued people from burning buildings, been stabbed, shot at, and saved his partner who had been wounded in a gun battle. He survived the terror attacks on 9/11, and a bombing plot in Iraq. He has been the target of numerous death threats, seized tons of cocaine and millions in drugs proceeds from the Cali Cartel, and brought cop killers, Colombian drug lords and Iraqi terrorists to justice.

His service to his country has been recognized in more than 100 awards for public and heroic service, including the New York City Police Department’s Medal for Valor, plus 29 other medals for excellent and meritorious service. He has been commended for heroism by President Ronald Reagan, and has also received the DEA Administrator’s Award from the U.S. Justice Department, two Distinguished Service Awards from the U.S. Department of Homeland Security, The Ellis Island Medal of Honor, and an appointment as Honorary Commander of the Most Excellent Order of the British Empire by Her Majesty Queen Elizabeth II. He has served on the Terrorism Committee of the International Association of Chiefs of Police (IACP), the Criminal Justice Advisory Council of St. John’s University in New York City, and the Academe and Policy Research, and Emergency Response Senior Advisory Committees for the U.S. Department of Homeland Security.

On December 3, 2004, President George W. Bush nominated Mr. Kerik as Secretary of the U.S. Department of Homeland Security.  One week later, Mr. Kerik withdrew his name from consideration, after admitting that he failed to pay payroll tax for his children’s nanny.

Five years of state and federal investigations followed. Mr. Kerik pled guilty to false statements and tax charges primarily relating to his children’s nanny and discounted apartment renovations. He was sentenced to 48 months in federal prison. He surrendered to the U.S. Federal Bureau of Prisons at a minimum-security prison camp in Cumberland, Maryland on May 17, 2010, and was released from custody on October 15, 2013.

He remains an avid supporter of America’s war against terror, and advocate for our nation’s military, and local, state and federal law enforcement.

Mr. Kerik resides with his wife, Hala, and his two youngest daughters in New Jersey. He also has a son who is a Newark, New Jersey Police Officer assigned to the Emergency Services Unit, and an older daughter who is married and lives in Virginia.