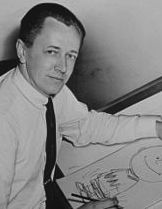 Charles M. Schulz was born November 25, 1922 in Minneapolis. His destiny was foreshadowed when an uncle gave him, at the age of two days, the nickname Sparky (after the racehorse Spark Plug in the newspaper strip Barney Google).

In his senior year in high school, his mother noticed an ad in a local newspaper for a correspondence school, Federal Schools (later called Art Instruction Schools). Between 1948 and 1950, he succeeded in selling 17 cartoons to the Saturday Evening Post–as well as, to the local St. Paul Pioneer Press, a weekly comic feature called Li’l Folks.

He started submitting strips to the newspaper syndicates. In the spring of 1950, he received a letter from the United Feature Syndicate, announcing their interest in his submission, Li’l Folks. Schulz boarded a train in June for New York City; more interested in doing a strip than a panel, he also brought along the first installments of what would become Peanuts–and that was what sold. (The title, which Schulz loathed to his dying day, was imposed by the syndicate). The first Peanuts daily appeared October 2, 1950; the first Sunday, January 6, 1952.

Diagnosed with cancer, Schulz retired from Peanuts at the end of 1999. He died on February 13, 2000, the day before Valentine’s Day–and the day before his last strip was published–having completed 17,897 daily and Sunday strips, each and every one fully written, drawn, and lettered entirely by his own hand–an unmatched achievement in comics.