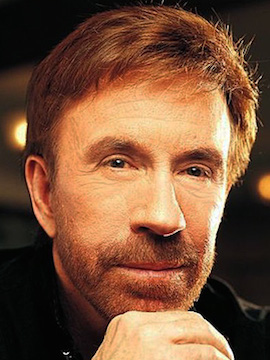 Chuck Norris is an international television and film star, as well as a world-renowned martial arts expert and teacher.

Norris is also a New York Times bestselling author of two books, including the 2004 autobiographical Against All Odds. He has also penned two books of fiction.  In 2006 he added the title of “columnist” to his list of credits with the launch of his popular Internet column on the independent news site WorldNetDaily.com.  His weekly column is now widely syndicated and carried by Human Events and Townhall, among other outlets.  Black Belt Patriotism: How to Reawaken America is his first book of social commentary.

A man of deep religious convictions and a giving spirit, among Norris’s more rewarding accomplishments is the creation of his “KICKSTART” program. This character-building, life-skills program has graduated more than 50,000 youngsters since its inception in 1990, with many of them going on to college. Chuck’s goal is to expand the program nationwide.

A former Airman First Class in the United States Air Force, past spokesperson for the U.S. Veterans Administration and Veteran Foundation’s Veteran of the Year Award recipient, he has spent hundreds of hours visiting soldiers at military instillations and in America’s veteran hospitals.  In 2007, he was made an honorary member of the United States Marine Corps in recognition of two recent visits to troops in Iraq.

One of the most popular actors in the world, Chuck Norris starred in the CBS television series, Walker, Texas Ranger, for eight full seasons. It is the most successful Saturday night series on CBS since Gunsmoke.  The program is currently seen by an estimated one billion viewers worldwide and airs daily in the U.S. and in more than 80 countries worldwide.  Millions of people around the world also know Chuck Norris as the star of films such as Delta Force, Missing in Action, Lone Wolf McQuade, and Sidekicks.  Few people know he wrote the original screenplays for a number of his box office hits.

Norris’s first international acclaim came as a six-time undefeated World Professional Middle Weight Karate Champion.  He is the first man from the Western Hemisphere in the more than 4,500 years of Tae Kwon Do to be awarded an eight-degree Black Belt Grand Master ranking.

Chuck Norris is the subject of countless Paul Bunyan-type fictional “facts” created by fans.  It is estimated that there are more than 600,000 such “facts” circulating on the Internet, with one “fact” generating site receiving as many as 18 million visits a month.

Norris and his wife Gena have seven-year-old twins, Dakota and Danilee. They live on a ranch near Houston.