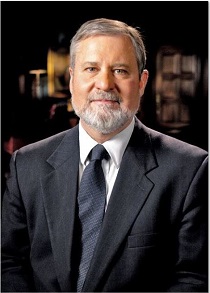 Larry P. Arnn is the twelfth president of Hillsdale College. He received his B.A. in 1974 from Arkansas State University, graduating with the highest distinction. He received his M.A. in Government in 1976 and his Ph.D. in Government in 1985 from the Claremont Graduate School. He also studied in England from 1977 to 1980, first as a research student in International History at the London School of Economics, and then in Modern History at Worcester College, Oxford University. While in England, he also served as director of research for the late Sir Martin Gilbert, the official biographer of Winston Churchill. He returned to the United States in 1980 to become an editor for Public Research, Syndicated, and from 1985-2000 he served as president of the Claremont Institute, an education and research institution based in Southern California. While at Claremont, he was the founding chairman of the California Civil Rights Initiative, which was passed by California voters in 1996 and prohibited racial preferences in state hiring, contracting and admissions.

Dr. Arnn is on the board of directors of the Heritage Foundation, the Henry Salvatori Center of Claremont McKenna College, the Philadelphia Society, the Intercollegiate Studies Institute, and the Claremont Institute. He served on the U.S. Army War College Board of Visitors for two years for which he earned the Department of the Army’s “Outstanding Civilian Service Medal.” In 2015, Dr. Arnn received the Bradley Prize from the Lynde and Harry Bradley Foundation.

He is a member of the American Political Science Association, the Mont Pelerin Society, the International Churchill Society and the Philanthropy Roundtable.  Published widely in national newspapers, magazines and periodicals on issues of public policy, history and political theory, he is the author of three books: Liberty and Learning: The Evolution of American Education; The Founders’ Key: The Divine and Natural Connection between the Declaration and the Constitution and What We Risk by Losing It; and Churchill’s Trial: Winston Churchill and the Salvation of Free Government.

In addition to serving as president, Dr. Arnn is a professor of politics and history at Hillsdale, teaching courses on Aristotle, on Winston Churchill, and on the American Constitution. He is also overseeing the production of seven document volumes that will complete the official biography of Winston Churchill, a massive biography of which Hillsdale College is now the sole publisher. Dr. Arnn and his wife, Penelope, have four children, Katy, Henry, Alice and Tony.