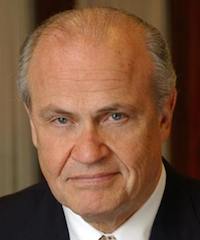 Fred Thompson is an American politician, actor, attorney, lobbyist, columnist, and radio host. Thompson, a Republican, served in the United States Senate representing Tennessee from 1994 to 2003.

Thompson served as chairman of the International Security Advisory Board at the United States Department of State, was a member of the U.S.-China Economic and Security Review Commission, a member of the Council on Foreign Relations, and is a Visiting Fellow with the American Enterprise Institute, specializing in national security and intelligence.

As an actor, Thompson has appeared in a large number of movies and television shows. In the final months of his U.S. Senate term in 2002, Thompson joined the cast of the long-running NBC television series Law & Order.

Thompson is a native of Sheffield, Alabama. He earned dual degrees from what is now the University of Memphis, and his law degree from Vanderbilt University.