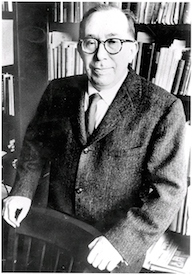 Leo Strauss was born in 1899 in the town of Kirchhain in Hesse, Germany. Strauss graduated from the Gymnasium Philippinum in nearby Marburg in 1917. In 1921 he received his Ph.D. from the University of Hamburg. In 1922 he spent a year at the University of Freiburg where he attended classes by Edmund Husserl and Husserl’s assistant Martin Heidegger.

From 1938 to 1948, Strauss was a member of the Graduate Faculty of the New School for Social Research. Paul Kraus had married Strauss’s sister Bettina, and Strauss adopted their only child, a daughter, upon the death of both parents in Egypt.

In 1949, Strauss joined the University of Chicago as a professor in the Department of Political Science, and in 1959 was appointed Robert Maynard Hutchins Distinguished Service Professor. He moved in 1968 to Claremont Men’s College for a year and a half, and in 1969 to St. John’s College-Annapolis, where he served as the Scott Buchanan Distinguished Scholar in Residence until his death in 1973.