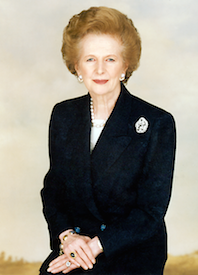 Margaret Thatcher was a British politician, Leader of the Conservative Party from 1979 until 1990, and the first (and only) woman to hold the position of Prime Minister of the United Kingdom.

Thatcher was born in 1925 in Grantham, Lincolnshire, England. Her father, a grocer, served as mayor and alderman of Grantham. Thatcher attended Oxford University, graduating in 1947 with a degree in chemistry.

She worked as a research chemist during her early days in politics, during which time she met and later married Denis Thatcher. The couple married in 1951 and had twins, Carol and Mark, in 1953.

Thatcher attended law school, specializing in taxation, and was elected to Parliament in 1959. She was selected as Education Secretary when the Conservative Party returned to power in 1970.

She served three terms as Prime Minister, and was for two decades the only woman to lead a Western democracy. She was succeeded as Prime Minister by John Major, who held the post until the Labor Party returned to power in May 1997.

Thatcher was granted a life peerage as Baroness Thatcher, of Kesteven in the county of Lincolnshire, upon her retirement from the House of Commons. This entitled her to sit in the House of Lords, which she did until she withdrew from public life in 2002. She died on April 8, 2013, of a stroke at the age of 87.