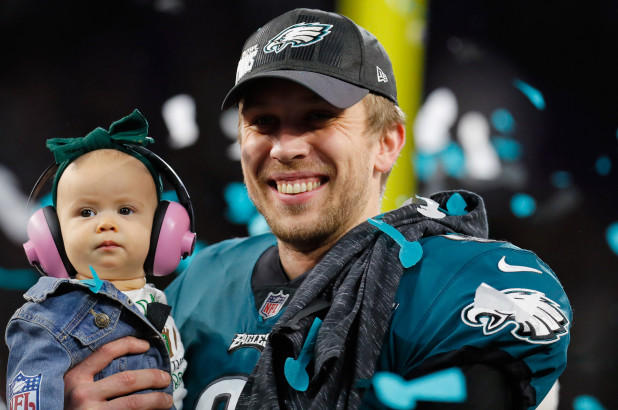 Born in Austin, Texas, in 1989, Nick Foles starred at quarterback for the University of Arizona before joining the NFL’s Philadelphia Eagles in 2012. He made the Pro Bowl following a record-setting 2013 season, but was traded to St. Louis after a disappointing, injury-marred 2014. Returning to Philly as a backup before the start of 2017, Foles was pressed into starting duty late in the year, and went on to be named MVP of the Eagles’ Super Bowl LII win over the New England Patriots.

Foles met his wife, Tori Moore, while the two attended the University of Arizona; he claims she was literally the first person he saw after arriving on campus. Also an athlete, she played volleyball at Arizona, and went on to work for Nike after graduation.

Tori eventually encountered health problems: She was diagnosed with Postural Orthostatic Tachycardia Syndrome (POTS), a condition in which a person’s heart rate can rapidly increase after standing, and later Lyme Disease. Foles stayed by her side, and the two were engaged during a visit to the Mayo Clinic in early 2014. They married that April, and had daughter Lily in June 2016.

Foles is the author of Believe It: My Journey of Success, Failure, and Overcoming the Odds.