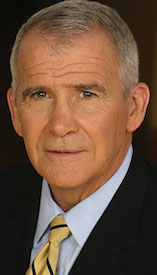 Oliver L. North is an author, political commentator, and military historian. He previously served as host of the FOX News Channel (FNC) program War Stories with Oliver North. He is a combat-decorated Marine, founder of a small business, inventor who holds three U.S. patents, syndicated columnist, and former candidate for the United States Senate.

Assigned to the National Security Council staff in the Reagan administration, North was involved in planning the rescue of 804 medical students on the island of Grenada and played a major role in the daring capture of the hijackers of the cruise ship Achille Lauro. After helping plan the U.S. raid on Muammar Qaddafi’s terrorist bases in Libya, North was targeted for assassination by Abu Nidal, the world’s deadliest assassin.

North also serves as the honorary chairman of Freedom Alliance, the conservative public policy organization he founded in 1990. Freedom Alliance is committed to strengthening morality in our public institutions and restoring honesty and integrity to our political system. Freedom Alliance is dedicated to the maintenance of a strong national defense, the protection of the rights and freedoms of individual citizens, and the adoption of policies that promote free enterprise.

North graduated from the U.S. Naval Academy in Annapolis, Maryland, and served twenty-two years as a Marine.  His awards for service in combat include the Silver Star, the Bronze Star for Valor, and two Purple Hearts for wounds in combat.