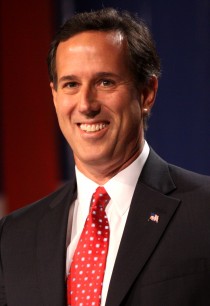 Rick Santorum is a former United States senator from Pennsylvania, Republican presidential candidate, and author of New York Times bestseller It Takes a Family (2005), and American Patriots: Answering the Call to Freedom (2012).

In 2012, Senator Santorum was a candidate for the Republican nomination for president of the United States where he won 11 states and nearly 4 million votes during the primary process.

Senator Santorum is co-founder of Patriot Voices, a grassroots and online community of Americans from across the country committed to promoting faith, family, freedom and opportunity. Patriot Voices was formed following Senator Santorum’s run for president and serves as a place for conservatives to join voices and be heard on the many issues facing our country today. He is also CEO of EchoLight Studios, which produces and distributes high-quality movies for families of faith.

Rick and his wife of 23 years, Karen, are the parents of seven wonderful children: Elizabeth, John, Daniel, Sarah Maria, Peter, Patrick, and Isabella.  Prior to running for president, Rick served in the U.S. House of Representatives from 1991 to 1995, and in the U.S. Senate from 1995 to 2007, where he was known as one of the most successful government reformers in our history.  Rick took on Washington’s powerful special interests from the moment he arrived in our nation’s Capitol in 1991. He was a member of the “Gang of Seven” that exposed the Congressional Banking and Congressional Post Office scandals, and he was an author of the landmark 1996 welfare reform bill that moved millions of Americans off of the welfare rolls and into meaningful work.