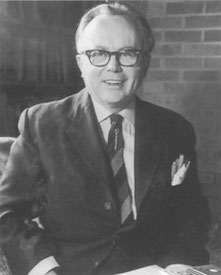 Russell Kirk was a leading conservative intellectual and author. He was the author of some thirty-two books, hundreds of periodical essays, and many short stories. Time and Newsweek described him as one of America’s leading thinkers.

He edited the educational quarterly journal The University Bookman and was founder and first editor of the quarterly Modern Age. For a quarter of a century he wrote a page on education for National Review, and for thirteen years published a nationally syndicated newspaper column through the Los Angeles Times. Over the years he contributed to more than a hundred serious periodicals, among them Sewanee Review, Yale Review, Fortune, Humanitas, The Contemporary Review, The Journal of the History of Ideas, World Review, Crisis, History Today, Policy Review, Commonweal, Kenyon Review, The Review of Politics, and The World and I.

He is the only American to hold the highest arts degree (earned) of the senior Scottish university—doctor of letters of St. Andrews. He received his bachelor’s degree from Michigan State University and his master’s degree from Duke University.

He was a Guggenheim Fellow, a senior fellow of the American Council of Learned Societies, a Constitutional Fellow of the National Endowment for the Humanities, and a Fulbright Lecturer in Scotland.