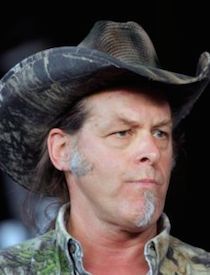 With over 35 million albums sold and more media face-time than most active politicians, Ted Nugent has earned his status as an American icon.

Renowned for modeling the high-octane civic activism he unabashedly encourages, he is a respected guest of top-rated, high-profile network, cable, news, sports, political commentary, and rock programs on television and radio. Ted Nugent Spirit of the Wild television show continues to be Outdoor Channel’s #1 Hunting Show year after year and Ted and Shemane are fan favorite hosts.

A recipient of numerous commendations from law enforcement agencies nationwide, Ted has been lauded for his Ted Nugent Kamp for Kids and Freedom’s Angels, work as a national spokesman for D.A.R.E., and as Ambassador for Big Brothers Big Sisters and the Pass It On-Mentors Program.

As America’s top proponent of the Second Amendment, Ted has served on the Board of Directors of the NRA since 1995.

Ted Nugent continues to fight for personal freedoms on the lecture circuit. He is an award-winning writer for more than forty publications, and author of the New York Times bestseller God, Guns, and Rock’n’Roll, as well as Kill it and Grill it, Bloodtrails II, and now Ted, White, and Blue: The Nugent Manifesto.

In 2008, he celebrated the most successful tour of his fifty-year career with Operation Rolling Thunder, setting attendance records in America and Europe and performing his 6,000th concert.