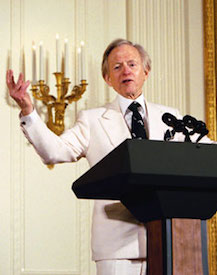 Tom Wolfe was born and raised in Richmond, Virginia. He was educated at Washington and Lee (B.A., 1951) and Yale (Ph.D., American Studies, 1957) universities. In December 1956, he took a job as a reporter on the Springfield Union (Massachusetts). This was the beginning of a ten-year newspaper career, most of it spent as a general assignment reporter. For six months in 1960 he served as The Washington Post‘s Latin American correspondent and won the Washington Newspaper Guild’s foreign news prize for his coverage of Cuba.

In 1962 he became a reporter for the New York Herald-Tribune and a staff writer of New York magazine, which began as the Herald-Tribune‘s Sunday supplement.

While still a daily reporter for the Herald-Tribune, he completed his first book, a collection of articles about the flamboyant Sixties written for New York and Esquire and published in 1965 as The Kandy-Kolored Tangerine-Flake Streamline Baby. The book became a bestseller and established Wolfe as a leading figure in the literary experiments in nonfiction that became known as New Journalism.

In 1968 he published two bestsellers on the same day: The Pump House Gang, made up of more articles about life in the sixties, and The Electric Kool-Aid Acid Test, a nonfiction story of the hippie era. In 1970 he published Radical Chic & Mau-Mauing the Flak Catchers.

In 1979 Wolfe completed a book he had been at work on for more than six years, an account of the rocket airplane experiments of the post World War II era and the early space program focusing upon the psychology of the rocket pilots and the astronauts and the competition between them. The Right Stuff  became a bestseller and won the American Book Award for nonfiction, the National Institute of Arts and Letters Harold Vursell Award for prose style, and the Columbia Journalism Award.

Wolfe lives in New York City with his wife, Sheila; his daughter, Alexandra; and his son, Tommy.