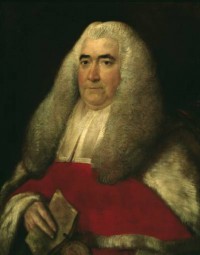 The famous English jurist Sir William Blackstone (1723-1780) is remembered for his Commentaries on the Laws of England, the first attempt since the 13th century to provide a comprehensive treatment of English law.

William Blackstone was born in Cheapside, London, on July 10, 1723, the posthumous son of Charles Blackstone, a merchant. He was educated at the Charterhouse School and at Oxford and entered the Middle Temple in London in 1740. He was elected a fellow of All Souls, Oxford, in 1744 and received the bachelor of civil law degree in 1745. Although he was admitted to the bar in 1746, he had limited success in practicing law and continued to hold several university posts and to lecture on English law.

Shortly thereafter, Blackstone was appointed to the newly created Vinerian chair. In 1761 he was elected to Parliament and also received a patent of precedence giving him the rank of king’s counsel. He resigned from his chair in 1766 due to his success at the bar that year, and in 1770 he was appointed a judge in the Court of Common Pleas, where he served, with no special distinction, until his death.

Blackstone was active in the prison-reform movement, worked against the tendency to extend the list of capital offenses, and was critical of the poor laws. In some technical areas, such as contract laws, his thinking was in advance of that of most of his contemporaries.

He conceived his task as being educational reform rather than the building of a philosophic system. In the 18th century the Inns of Court had practically ceased to play their traditional role in legal education, and apprenticeship had largely replaced academic training. Blackstone gave the first regular university lectures on English law and sought not only to provide formal instruction for prospective lawyers but to present the basic elements of common law as an integral part of the academic education of English gentlemen.

In the United States, Blackstone’s example contributed significantly to the development of law schools, and during the Revolutionary and postrevolutionary periods the Commentaries was the most widely read law text in America. After 1850 United States lawyers no longer tried to copy Blackstone, for living law was being shaped by the local institutions. By the middle of the 20th century few Americans had read Blackstone, even as a classic, but he remains a symbol for American lawyers.