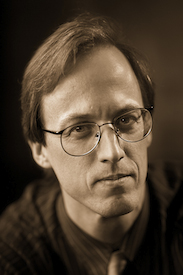 A mathematician and philosopher, William A. Dembski is Senior Fellow with Discovery Institute’s Center for Science and Culture and a Senior Research Scientist with the Evolutionary Informatics Lab.

In addition to lecturing around the world at colleges and universities, he appears on radio and television. His work has been cited in newspaper and magazine articles, including three front page stories in the New York Times as well as the August 15, 2005 Time magazine cover story on intelligent design. He has appeared on the BBC, NPR (Diane Rehm, etc.), PBS (Inside the Law with Jack Ford; Uncommon Knowledge with Peter Robinson), CSPAN2, CNN, Fox News, ABC Nightline, and The Daily Show with Jon Stewart.