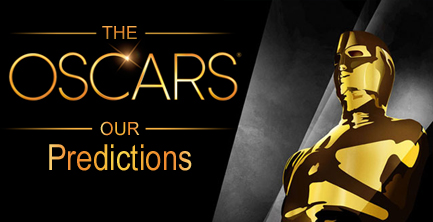 Will Win: The Revenant (Confidence Level: 65%)

Should Win: The Revenant

Could Win: The Big Short or Mad Max: Fury Road

Though most people would say this is a three-movie race, they’ve got the wrong three.  Judging by Oscar love, it’s The Revenant, The Big Short, and…Mad Max: Fury Road – I’m not kidding, and Spotlight is not a real contender.  Mad Max has a ton of love out there deservedly, and George Miller could upset for Director.  At the end of the day, my two favorite movies this year are The Revenant and Mad Max – both are visually-stunning stories and help reinvent movie-making.  But The Revenant is in the vein of traditional Best Picture Oscar winners due to its grandiose nature, and simply, because you’ve never seen a movie like this before.  I will say that the preferential ballot they now use could sway this towards The Big Short, especially if Christian Bale pulls off a surprise Best Supporting Actor win, but it’s unlikely.  Outside of winning Best Adapted Screenplay and Editing, it wins nowhere else.

While Inarritu would become the first Oscar winner to win back-to-back Best Director awards since the 1950s, he’s incredibly deserving for this masterpiece.  I’m one of the few people in my group of friends who believed that Birdman was incredibly deserving of beating out Boyhood for Best Picture last year as it was a refreshing look at movie-making – much like all of Inarritu’s work is.  Inarritu won the prized Director Guild Award (DGA) this year, which is one of the best indicators for this award, but George Miller has a lot of sympathy behind him for never having won before.  Depends where the mood of the Oscar voters are, but it’s hard to see The Revenant being made without the tenacity and fortitude of Inarritu.

Sure, he’s done better work, but it’s long overdue and it still is a masterful performance in a very unhospitable environment.  Plus, the bear scene is one of the most memorable scenes in cinema.

She’s unstoppable at this point winning most of all the precursor awards.  From what everyone says, she gives one of the most haunting performances in modern memory.  This is a movie that I’m even uneasy about seeing!

I’m so sick and tired of people telling me Stallone doesn’t deserve it for this performance.  Why?  Who the hell cares if it may not be his best – it’s Rocky Balboa, an American legend!  It’s a shame he never won before for portraying Rocky.  Stallone has had a storied career lasting over four decades and truly does give a heart-warming performance in Creed.  I’m tired of the Mark Rylance “should win” campaign – he did a good job in Bridge of Spies, but nothing earth-shattering.  And if we want to give it to someone who’s had a storied career, give it to Stallone who has done more memorable work than Rylance.

The real dark horse here could Hardy of Bale.  Hardy has had a stand-out year, not just for his role in The Revenant but also for Mad Max (though he gets overshadowed by Charlize Theron).  Bale has a lot of Oscar love and if The Big Short wins Best Picture, there is a pathway for Bale to nab the only acting nomination for The Big Short – but it’s unlikely.

In all honesty, I haven’t seen The Danish Girl, but saw Vikander in Ex-Machina – one of my favorite movies of the year.  She’s been getting most of the precursor awards, but Winslet has won a few big ones.  I’m not sure why since she’s done better performances and Steve Jobs the movie hasn’t gotten much Oscar love (though I did really enjoy it and can’t believe Aaron Sorkin did not get nominated for Best Adapted Screenplay).  Maybe there is a push so there could be pictures of Leo and Kate both winning, after not winning for Titanic back in the day – I don’t know.

If Spotlight were to win somewhere, it would be here.  Critics rave about it, but I don’t personally know anyone who’s seen it – including myself, but it does seem to have all the precursor buzz.  I loved Ex-Machina as it was incredibly well written and refreshingly original, but if there is a shocker here, it will be for Straight Outta Compton because of the Oscar racial controversy this year, and because we have to be PC, so we’re told, even though Chris Rock is hosting the Oscars tonight. (sarcasm here)

Should Win: The Big Short

This movie was incredibly original and fun – well deserving of this award.  The actors talking to the audience and special cameos made this a ton of fun.  I did think it was somewhat uneven though, but did its best to explain complicated economic issues that brought us the housing economic crisis in 2008.

Will Win: The Revenant (Confidence Level: 55%)

Should Win – TIE: The Revenant and Mad Max: Fury Road

Amazing contributions were made to cinema with the stand out performances of The Revenant, Mad Max and Sicario using some of the most inventive ways of telling stories dramatically through these visually stunning movies.  At the end of the day though, I think The Revenant elbows out Mad Max and Sicario since it was all done outdoors in nature – a real tough challenge!  Mad Max is incredibly ambitious, and I would not be surprised if it won here, but I think The Revenant and all its challenges in making it will give it the edge.  I would be very happy though if Sicario won, even though it was not as ground-breaking as the other two, but it was a mesmerizing visual experience metaphorically showing us the Heart of Darkness in visual form.

Should Win: The Big Short

Could Win: Mad Max: Fury Road, The Revenant or Sicario

The Big Short has the edge as it was probably the most challenging to edit because the movie relies so heavily on editing as its form of delivery.  Mad Max could surprise here, with The Revenant nipping at its heals.

Could Win: The Revenant

Visually stunning set design transporting you to an imaginary dystopian world in a way that you’ve never seen before.  The Revenant could surprise because of its originality, but the edge goes to Mad Max.

Should Win: Inside Out

Could Win: Carol or The Danish Girl

Totally unique and original.  I still remember the costume of Immortan Joe!  Lots of artsy buzz for both Carol and The Danish Girl, but not the love, and not really that original.

Could Win: The Revenant

Imaginative, original, fun – this should go to Mad Max.  The Revenant was well done, but not as groundbreaking.

Will Win: The Revenant (Confidence Level: 40%)

Should Win TIE: The Revenant and Mad Max: Fury Road

By far, the most difficult category of the year!  Any of these movies could win, and would be happy with most of them.  I think The Revenant has a little edge, but Mad Max is behind by just a hair.  The Martian was good, but nothing like Gravity or the ambitious Interstellar – hard to see if winning, but not impossible.  Lot of love for Star Wars out there as the original three movies dominated this category, but not sure if it’s as original as the two other frontrunners.

Will Win: The Revenant (Confidence Level: 65%)

Should Win: The Revenant

Could Win: Mad Max: Fury Road or The Martian

The Revenant seems like an obvious choice because of all the sounds of nature it employs, but the explosions and car chase scenes in Mad Max are very memorable.  The Martian has its good parts, but may not be enough for this category.

Could Win: The Revenant, Star Wars, The Martian, or Sicario

Ok, so this might be the absolute hardest category this year after visual effects.  All of these movies created some amazing sounds that enhanced all these movies.  In the end, it’s the originality of Mad Max which gives it the edge, though I’ll be happy with any of these wonderful movies if they win.

Should Win TIE: Bridge of Spies or Sicario

Could Win: Carol or Star Wars: The Force Awakens

The composer of The Hateful Eight is a beloved composer who’s 84 years old and has never won an Oscar before.  Sympathy factor is huge here.  I personally loved the traditional Bridge of Spies soundtrack and Sicario’s haunting and dark score.  Many people are talking about Carol as a dark horse.  For some reason, there is a movement for Star Wars, even though it’s almost 40 years old!

Will Win: “Writing’s on the Wall” by Sam Smith (Spectre) (Confidence Level: 15%)

Should Win: “Writing’s on the Wall” by Sam Smith

Could Win: “Till it Happens to You” by Lady Gaga (The Hunting Ground)

I hate this category.  They never vote for the most deserving.  Like the Grammy’s, it’s totally based on superficial things.  Everyone thinks Lady Gaga will win because she sung at the Super Bowl, and won awards at the Emmy’s and Grammy’s.  May be so, but I’ve listened to all the songs and I’m sticking by Sam Smith as I really thought his song was one of the more memorable aspects to the new James Bond movie.  Have you ever even heard of The Hunting Ground?  I might be misplacing my faith in the academy to pick the right song, but I’ll probably get this wrong, but I’m standing on principle here!

Should Win: Son of Saul

Son of Saul is winning all the precursors.  Haven’t seen it, but don’t need to.  It’s about the holocaust and WWII – it’ll win.  France isn’t gonna beat a WWII movie 😉

Amy is about Amy Winehouse.  Huge.  Won all major precursors.  History holds that the documentary that has the wind at its back, plus the buzz with a memorable celebrity or cause celebre, will win.

Will Win: A Girl in the River: The Price of Forgiveness (Confidence Level: 35%)

Who the hell knows.  Going with the precursors.  A Girl in the River though has gotten big heartfelt support.

Saw some of World of Tomorrow and was pretty impressed with the subject matter, even though the animation is basic.  Very mature storyline for an animated short, but memorable.

Stutterer has critic support, but so does Shok.  Saw the trailers and am going with Stutterer as it looks incredibly personal and touching, as Shok looks disturbing.