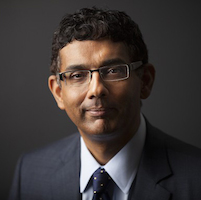 Bestselling author Dinesh D’Souza has had a major influence on American public policy for more than twenty years. He was called a “top young public-policy makers in the country” by Investor’s Business Daily, and the New York Times Magazine named him one of America’s most influential conservative thinkers.

He is the creator of the film 2016: Obama’s America (2012). The film is the second-highest-grossing all-time political documentary, passing Michael Moore’s Sicko and Al Gore’s An Inconvenient Truth. In addition, 2016 was #6 on the bestselling list of all documentaries. A new film based on his book America opens nationwide on July 4th, 2014.

He was the Robert and Karen Rishwain Fellow at the Hoover Institution at Stanford University and the John M. Olin Fellow at the American Enterprise Institute. He served as senior policy analyst at the Reagan White House, and he was managing editor of Policy Review. He graduated Phi Beta Kappa from Dartmouth College in 1983. D’Souza speaks at top universities and business groups across the country.

His articles have appeared in virtually every major magazine and newspaper, including Forbes, The New York Times, The Wall Street Journal, Atlantic Monthly, Vanity Fair, New Republic, and National Review.