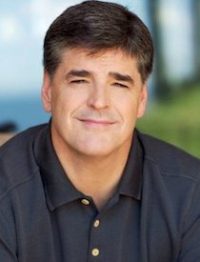 Sean Hannity currently hosts FOX News Channel’s Hannity and also hosts his own nationally syndicated talk radio show, The Sean Hannity Show. He joined Fox in 1996 as one of the original primetime hosts on the Fox News Channel, and today he is among the most listened-to voices on air.

Sean Patrick Hannity was born December 30, 1961, in New York City. The youngest child and only son of first-generation Irish immigrants Hugh and Lillian, Hannity grew up in Franklin Square, a Long Island suburb of New York. Both of Hannity’s parents worked in the justice system: Lillian as a corrections officer and court stenographer and Hugh as an officer in New York City’s family court system.

Hannity attended local Catholic schools, followed by stints at Long Island’s Adelphi University, New York University and the University of California-Santa Barbara. Instead of graduating from college, Hannity focused on his childhood fascination: a radio career.

Hannity regularly interviews the most influential newsmakers and political figures. His former guests include then-President George W. Bush, then-Vice President Dick Cheney, Reverend Jesse Jackson and then-Speaker of the House Newt Gingrich – as well as an exclusive interview with George Zimmerman. Previously, he co-hosted Hannity & Colmes with Alan Colmes for 12 years. Their show reached the second-highest rating across all cable news programs.

Prior to his roles with WABC and FNC, Hannity hosted a radio talk show in Atlanta on WGST-AM and frequently substituted for Rush Limbaugh. He wrote Let Freedom Ring in 2002 and in addition, two New York Times bestsellers: Deliver Us From Evil (2005) and Conservative Victory (2010).

In October 2003, Hannity received two NAB Marconi Radio Awards for Network Syndicated Personality of the Year. He has also won the Radio & Records National Talk Show Host of the Year Award three years in a row. In 2017, Hannity was inducted into the Radio Hall of Fame.