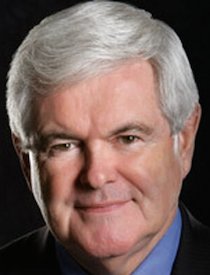 Newt Gingrich is well-known as the architect of the “Contract with America” that led the Republican Party to victory in 1994 by capturing the majority in the U.S. House of Representatives for the first time in forty years. After he was elected Speaker, he disrupted the status quo by moving power out of Washington and back to the American people.

Newt Gingrich was the co-host of CNN’s Crossfire from 2013 to 2014, where he advocated bold policy ideas. From May 2011 to May 2012, Newt Gingrich was a candidate for the Republican nomination for president of the United States, winning the South Carolina and the Georgia primaries. The campaign was especially notable for its innovative policy agenda, its effort to bring new coalitions into the Republican fold, and for Newt’s debate performances. His $2.50-a-gallon energy plan set off a nationwide discussion about the use of America’s energy resources.

Newt has published twenty-four books including 14 fiction and nonfiction New York Times best-sellers. Non-fiction books include A Nation Like No Other, Ronald Reagan: Rendezvous with Destiny, To Save America, Rediscovering God in America, 5 Principles for a Successful Life, Drill Here, Drill Now, Pay Less, Real Change, A Contract with the Earth, Winning the Future: A 21st Century Contract with America, To Renew America, Lessons Learned the Hard Way, Saving Lives & Saving Money, Window of Opportunity, and The Art of Transformation. He is also the author of a series of historical fiction books, including Gettysburg, Grant Comes East, Never Call Retreat: Lee and Grant the Final Victory, 1945, Pearl Harbor, Days of Infamy, To Make Men Free, To Try Men’s Souls, Valley Forge, and his latest, Victory at Yorktown. These novels are active history studies in the lessons of warfare based on fictional accounts of historical wartime battles and their aftermaths.

Newt was first elected to Congress in 1978, where he served the Sixth District of Georgia for twenty years. In 1995, he was elected Speaker of the U.S. House of Representatives, where he served until 1999.