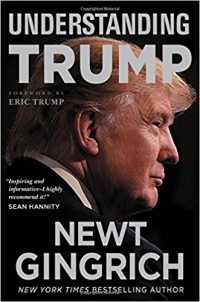 Trump surrogate and close friend Newt Gingrich offers a new and interesting insight into the mind of President Donald Trump in his new book, Understanding Trump.

The book attempts to explain some misconceptions about Trump and offer hope for the future of his administration. Equal parts anecdotal history and policy proposals, Understanding Trump looks into Donald Trump’s life before, during, and after the election and gives unprecedented insight into what his administration is shaping up to do.

Understanding Trump comes Trump approved, featuring a foreword by Eric Trump, who talks of Newt Gingrich’s friendship to the Trump family through the years before going on to praise his own father as “brilliant and strong” and promising that “this book will stand apart because Newt was one of the very few who got it right-he is a friend and he was there from the beginning.” This close friendship between the Trumps and the Gingrichs allows Newt to layer facts and figures from Trump’s past with personal anecdotes about their time together, including fast food orders on private planes, golf outings at Trump National, and deep conversations with the Trump children.

There is never a lack of media speculation on what Donald Trump means or what he knows or what his intentions are, but Gingrich puts them all to shame when he explains Trump’s “four sided table” that positions him as: anti-Left, anti-stupid, anti-political correctness, and pro-American.

Borrowing heavily from sections featured in Trump’s infamous book, The Art of the Deal, Gingrich explains just how Trump will tackle major issues in the government by comparing them to crises he faced in his business dealings. He emphasizes Trumps “predilection for meritocracy” which will no doubt excite Americans around the country who are tired of affirmative action policies and bureaucratic hirings that cost millions without benefiting us a dime.

Once he establishes his proximity to Trump and Trump’s successful business practices, Gingrich turns to Trump’s new administration and how it can succeed, even with the Left and the media working tirelessly against him. He outlines the way forward succinctly in his “four box policy model” which puts Trump’s executive priorities in the following order: safety (including military defense, terrorism, and crime,) American competitiveness (especially in business, trade, and tax reform,) health care (including an eventual repeal and replacement of Obamacare,) and making government work.

Gingrich is clearly well-versed in the policies of Trump and the Republican Party and what the role of government is and is not. He proves this most effectively in his final chapters, when he proposes numerous projects for the government (local and national) to undertake, including: allowing citizens to recommend regulations for repeal, dramatic regulatory reform on infrastructure projects, cutting federal red tape to save money, establishing an advisory group of entrepreneurs to rethink government in the technological age, and establishing more work-study colleges.

If you like Understanding Trump, check out Newt Gingrich’s other books!