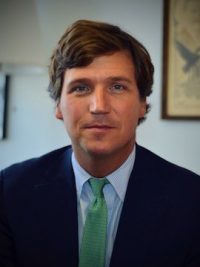 Tucker Carlson has been a mainstay of conservative journalism for over 20 years.  Currently, he hosts of Fox News Channel’s highly rated Tucker Carlson Tonight. He also co-hosts FOX & Friends Weekend and has been with FOX News Channel for 9 years.

Before his time with FOX, Carlson started as a co-host on CNN’s The Spin Room and Crossfire. When he got his television start in 2000 with CNN and The Spin Room, Carlson was the youngest CNN anchor ever. He hosted Tucker on MSNBC from 2005-2008, and founded the successful conservative-leaning news website, The Daily Caller, in 2010.

Carlson began his journalism career as a member of the editorial staff of Policy Review, a national conservative journal then published by The Heritage Foundation (and since acquired by the Hoover Institution). He later worked as a reporter at the Arkansas Democrat-Gazette newspaper in Little Rock, Arkansas, and at The Weekly Standard.

As a magazine and newspaper journalist, Carlson has reported from around the world. He has been a columnist for New York and Reader’s Digest. He has also written for Esquire, The Weekly Standard, The New Republic, The New York Times Magazine, and The Daily Beast.

Carlson published Politicians, Partisans, and Parasites: My Adventures in Cable News in 2003. His next book, Ship of Fools, lands on shelves this October.

Carlson graduated with a B.A. in history from Trinity College. Now, he lives in Washington, DC, with his wife and children.